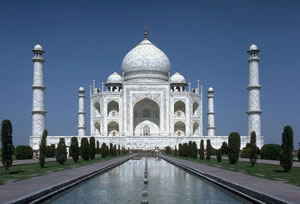 Agra has long been renowned as the city of the Taj Mahal. This has often overshadowed the fact that this royal Mughal has, in addition to the legendary Taj, many magnificent monuments that epitomize the high point of the Mughal architectural achievement. Not even Delhi the seat of kings and emperors for over a thousand years, can boast such a heritage of architectural and cultural splendor from the golden age of the Great Mughals.

The Chosen City
Agra was the chosen city of the Mughal emperors during the early years. It was here that the founder of the dynasty, Babar, laid out the first formal Persian garden on the banks of the River Yamuna. Here, Akbar, his grandson, raised the towering ramparts of the great Red Fort. Within its walls, Jehangir built rose-red palaces, courts and gardens. Shah Jehan embellished it with marbled mosques, palaces and pavilions of gem-inlaid white marble. At Sikandra, on the outskirts of Agra, Akbar built his own garden mausoleum. And at Fatehpur Sikri he created a whole new city - a leap of the imagination that made real a unique concept of planning and design and gave expression to a style of architecture that was a perfect blend of Islamic spatial concepts and the Hindu genius for decorative sculpture. Across the river, Jehangir's gifted queen, Noor Jehan, designed an exquisite marble-inlaid tomb for her parents. But Agra's crowning glory remains the Taj Mahal, a monument to love built by Shah Jehan in memory of his beloved queen, Mumtaz Mahal.

Climate : Agra has a climate of extremes. The summer lasts from mid-March to the end of June, with average maximum and minimum temperatures of 36º C and 25º C respectively. The monsoons follow the hot summer, continuing till the end of September with an average rainfall of about 26 inches. The winter extends from late November to mid-February. The coldest month is January, when both the maximum and minimum temperatures are at their lowest - 21º C and 7º C respectively.

Places of Interest in Agra

Taj Mahal - A Monument of Love 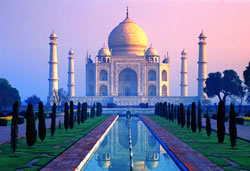 The Taj Mahal stands serene and perfect in its garden of cypresses and reflecting pools on the banks of the River Yamuna. Its pure white marble shimmers silver in the moonlight, glows softly pink at dawn, and at close of day reflects the fiery tints of the setting sun. The Taj in all its timeless beauty is still the inspiration of poets and painters, writers and photographers. And lovers still meet here in the moonlight in the shadow of the world's most famous monument to love.

Shah Jehan built the Taj in memory of Mumtaz Mahal who died giving birth to their 14th child. No cost was spared to make it the most beautiful monument the world had ever seen. White marble and red sandstone, silver and gold, camelian and jasper, moonstone and jade, lapiz lazuli and coral were fashioned by 20,000 skilled workers to make the emperor's dream a reality. It took 22 years to complete - a symbol of eternal love where Shah Jehan too lies buried, re-united at last with his beloved Mumtaz.

Set at the north end of a formal Persian garden with water courses, paved walkways and rows of dark cypresses, the Taj rises on a high red sandstone base topped by a huge white marble terrace, its flawless double dome flanked by four tapering minarets. Within lies the jewel-inlaid cenotaph of the queen, and a little to one side - the only asymmetrical feature in the Taj - the richly decorated casket of the emperor. Both are enclosed by an octagonal screen of finely pierced marble. So perfect are the proportions of the Taj, so exquisite its workmanship, that it has been described as having been designed by giants and finished by jewellers. 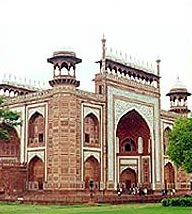 Few forts in the world have a more fascinating story to tell than the Great Fort of Agra. Originally planned as an impregnable military structure by Akbar, the Agra Fort, over a period of time, acquired all the elegance, lavishness and majesty of an imperial palace.

Situated 3 km upstream of the Taj Mahal on the right bank of the Yamuna, the Agra Fort was built under the direction of Akbar, by Mohammed Quasim Khan, his Commander-in-Chief and Governor of Kabul. It took eight years to complete and entailed an expenditure of three and a half million rupees.

About 4 km north of the Taj, on the left bank of the Yamuna, is the perfectly proportioned marble mausoleum of ltmad-ud-Daulah. Noor Jehan constructed this splendid marble monument in her father's memory. This double-storied marble tomb is replete with mosaic, inlaid with semi-precious stones. 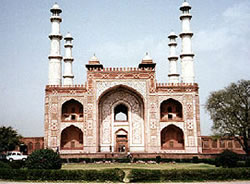 Sikandra is 8 km north-east on the Agra-Delhi road. It is on the same side of the river Yamuna as the Taj. Sikandra was built in 1492 by Sikander Lodhi, a ruler of one of the last dynasties of the Delhi Sultanate.

Akbar, in his time, ordered the construction of Sikandra again, this time as a site for his mausoleum, but he died before it could be completed. The work was completed by his son Jehangir in 1613. The tomb is a combination of Muslim and Hindu architectural styles. The building of red sandstone is four storeys tall, approximately 31 metres in height. The first three storeys are of red sandstone, while the fourth is entirely of marble.

This is the headquarter of the Radhasoami religious sect, founded in 1861 by Shri Shiv Dayal Singh, also known as Swamiji Maharaj. Being built to commemorate the Supreme Creator, this tall, unfinished facade of marble, lined with exquisitely carved pillars and panels, was estimated to cost about five million rupees when it was conceived. Today, the cost of work finished and work still to be done will run into ten million.

Excursions : Include visit to Fatehpur Sikri, the capital of Emperor Akbar for 16 years; Mathura, the birth place of Lord Krishna; Bharatpur, best known for its bird sanctuary.