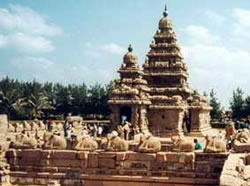 Madras, or Chennai as it is now called, is known as the Gateway of Southern India. The East India Company developed Chennai as one of the major trading centres in India. Chennai has a blend of Dravidian and Gothic architecture in its buildings. The city might have grown but it has never lost its traditional grace and charm. The Tamil society might have incorporated English culture but the Dravidian roots are as strong as ever.

Chennai is the epitome of tradition, culture and life-style of Southern India. But like the rest of India, Chennai has over the years, developed its share of urban style and modernity. Accommodation and transportation are cheap and efficient. It is very likely that the temples that you will visit in Chennai are unlike any other that you have seen before. Visit the 4.5 km long Golden Marina beach,one of the longest beaches in the world.

Unlike Mumbai, the Chennai port is not a natural harbour. Nevertheless, this man-made port is very modern and efficient in handling cargo and other traffic. Today Chennai is the fourth largest city in India and commands a major share in the trade from the South.

Climate : Chennai has a very hot tropical climate. The temperature variation between winters and summers is minimal. Rainfall is timely and tends to be heavy during the monsoons. Proximity to the sea makes the atmosphere heavy and humid. The summers are sultry and hot while winters are warm. As such Chennai has enough to offer a year round tourist season and one can visit the place any time.

Best times to visit : Between November and February

Places of Interest in Chennai

Fort St. George was among the first few bastions built by the East India Company to protect its interests in India. This fortification also marks the beginning of Madras (Chennai) as a modern city. 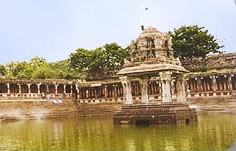 Chennai has many temples and each one of them is worth a visit. One of the largest and oldest temples in Chennai, the Kapaleeswarar temple has inscriptions from the 13th century A.D. and is dedicated to Lord Shiva. The architectural style of the temple is one of the best examples of Dravidian architecture. The walls and pillars of the temple are very delicately and intricately carved and depict scenes from Hindu mythology.

This 8th century temple was built by the Pallavas and is dedicated to Lord Krishna and houses images of the five avatars (incarnations) of Vishnu. It also has a small shrine dedicated to Vishnu's consort Vedavalli Ammai. The temple was renovated in the 16th century by the Vijayanagar kings.

If you like visiting places of both historical and religious interest, the Little Mount Shrine is perfect. It is said that St. Thomas lived and preached from this place.

The apostle is believed to have been killed by his assassin on this hill. St. Thomas Mount remains a landmark in Chennai.

One of the largest and best snake parks in India, the Chennai Snake Park attracts visitors of all ages. The collection of reptiles and Indian snakes is quite amazing. One can watch the snakes being fed, their venom being removed and if one is not squeamish about snakes, can touch them too.

Golden sands, good surf and a simmering clean sea is what one can expect to find on one of the longest beaches in Asia. Take along your sun tan lotions though.

Chennai is head quarters to the Theosophical society in India. The society was initially located in the USA but was later shifted to Chennai. The huge Banyan tree spanning 40,000 sq. ft serves as the place where discourses are given. This place houses shrines of almost all faiths and a 95 year old library with a rare collection of books and manuscripts, many of which are written on palm leaves and parchments.

Meaning the 'Centre of Arts', the Kalakshetra was established to train people in the traditional dance form, Bharatanataym. Founded by Rukmani Devi in 1936 to encourage and arouse interest in this classical dance, this temple has developed into an institution devoted to the revival of traditional dance, textile designing and weaving, taught in its natural harmonious environs.

Equipped with fully computerised projectors to depict the world beyond earth, the Birla Planetarium is one of the most modern planetariums in the country. It makes audio-visual presentations to the public and students on various themes in astronomy. These presentations are made in a manner that introduces even the basic of laymen to the mysteries of the universe.

A memorial to the immortal Tamil poet-saint Thiruvalluvar, this landmark is located at Nungambakkam. The shrine is a replica of the chariot temple of Thiruvarur. A life size statue has been installed on the chariot. It also has an auditorium, which can accommodate 4000 people at a time and is the largest in Asia.

The museum houses a fine collection of items in various sections of geology, archaeology, numismatics, anthropology, botany and zoology.

A site of many ancient sculptural marvels, Mamallapuram was the port city of the Pallavas. The Pallavas had mastered the art of construction without using bricks or mortar, carving out exquisite sculptures from rocks. The best example of their art here are the five monolith chariots, the pride of Mamallapuram. The various panels on the walls depict scenes from Hindu mythology and fables from the Panchtantra. Located 61 kms from Chennai, it is now known as Mahabalipuram.

Close to Mahabalipuram and 44 kms from Chennai is the Crocodile breeding and research centre run by Romulus Whittaker. This farm breeds several species from India and Africa in captivity to augment the crocodile population. These crocodiles are kept in captivity and can be viewed from a safe distance.

This place is an ideal picnic spot with facilities for boating and wind surfing. It is 6 kms from Chennai.

The Shiva temple here is located on top of a hill, 160m high. Try and make it to this place around lunch time. Every afternoon, two white kites come to the temple and are fed by the priest. It is believed that these kites are saints who stop at the temple on their journey to Varanasi from Rameshwaram. Below the hill temple is the larger Shiva temple with a tank which is said to have healing powers. Every 12 years, a conch is found in the tank. A large collection of such conches is kept in the temple. Thirukkalukundram is 70 kms from Chennai.

A variety of birds migrate to Vedanthangal Bird Sanctuary every year. This sanctuary is one of the largest sanctuaries for birds in India. Varied species of birds can be spotted here. The best season to visit this marshy, 30-hectare park is between November and February. It is 85 kms from Chennai.

The golden city of temples is one of the seven most famous holy cities of Hindu mythology. The weavers of Kancheepuram have been famous from ancient times for some of the best woven silk sarees in the world. It has also been the centre of culture and learning down the ages. Adi Shankaracharya, one of the greatest gurus of Hindu spirituality established his ashram here. Kancheepuram is 75 kms from Chennai.

While Chennai celebrates most major Indian festivals, Pongal - the harvest festival is Tamil Nadu's own festival. This festival is a thanks and prayer for prosperity, celebrated in mid-January with much feasting, music and dance.

The festival of lights and Holi, the festival of color are popular. The other festival celebrated with a lot of fervor is the Tamil New Year, which falls in the month of April.