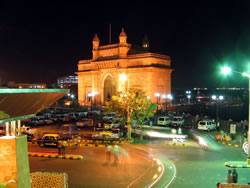 Bombay, or Mumbai as it is now called, is the commercial capital of India, a city of entrepreneurs, concrete towers, clubs and discos, cricket, Bollywood and more.

The city, a cluster of seven islands, was named by its native Koli fisherfolk after the goddess Mumbadevi. After the Portuguese gained possession of the islands in 1534, they renamed it Bom Bahia, for the natural harbour, which served as a safe haven for its ships.

In 1661, Charles II of England received the islands of Bombay as dowry when he married Princess Catherine of Braganza. The British Government leased the islands to the East India Company, who developed it into a thriving trading port.

The promise of business opportunities and religious freedom drew people to Bombay from all over the country. As the migrant population burgeoned, land was reclaimed, and the city began its haphazard metamorphosis from a trading post into a metropolis and industrial hub.

The city also became a hotbed of political activity during the struggle for independence, hosting the First Indian National Congress in 1885. Nearly fifty years later, the Quit India movement was launched in Bombay.

In the mid-'90s, the city was rechristened Mumbai.

Today, Mumbai is the country's financial and cultural centre. It is also home to a thriving film industry. It is seen, to the teeming masses that flock there to live and work, as a place where opportunities abound. Its inhabitants, an amalgam of great wealth and abject poverty, are swept into the endless maelstrom of activity that characterizes this city of dreams.

Climate : Being on the coast of the Arabian Sea, Mumbai's climate is largely influenced by the sea. The climate is moderate, with summers hot and winters pleasant. The monsoon lasts from June to September, and rainfalls heavy.

Best times to visit : The best time to visit Mumbai is between November and February. It is advisable to avoid Mumbai during the monsoon months

Places of Interest in Mumbai

Formerly known as Victoria Terminus (VT), this is one of the most imposing buildings in Mumbai. It was from Chattrapati Shivaji Terminus that the country's first train rolled out. At the entrance to the terminus is a large statue of Queen Victoria. The clock on tower is 3.19m in diameter. Stone gargoyles, peacocks, monkeys, elephants and British lions are placed among the buttresses, domes, turrets, spires and stained glass windows. The Terminus looks more like a cathedral than a railway station. 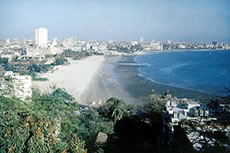 Chowpatty beach is located in the heart of Mumbai. Every evening, the beach is transformed into a hub of activity. Historically, during the freedom struggle, public meetings and rallies were organized here.

The Gateway of India was built in 1924 to commemorate the visit of King George V and Queen Mary to India. Built in the 16th century Gujarati style, the monument stood testament to British supremacy. Ironically, it was from here that the last British troops left the country after independence.

This mosque is located at the end of a long causeway protruding into the Arabian Sea. The white mosque is the tomb of Saint Haji Ali, a wealthy Muslim who renounced the world and proceeded to Mecca. It is said that he died in Mecca and the casket miraculously drifted to the spot at which the mosque is built toady. The mosque can only be approached during low tide.

The Hanging Gardens or Ferozshah Mehta Gardens were laid in 1881 on top of a reservoir on Malabar Hill. The garden provides a spectacular view of the city.

This building, designed in the English Gothic Style, was built in 1878. The main structure rises 54.2 m in height and is surmounted by statues representing Justice and Mercy.

Better known as Flora Fountain after the beautiful stone fountain at its centre, Hutatma Chowk is the established business centre of Mumbai. The Fountain was erected in 1869 in honour of Sir Bartle Frere, Governor of Bombay, who was responsible for shaping much of Bombay. 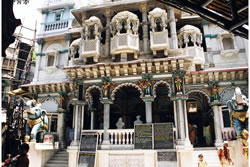 The Jain Temple, built in white marble, is dedicated to Adinath, the first apostle of the Jains. The temple is decorated with paintings depicting incidents from the life of the Tirthankaras. The first floor of the temple is particularly dedicated to Parasnath. His image has been carved out in black marble and images of planets as seen in Hindu mythology, adorn the ceiling.

Kala Ghoda (Black Horse) got its name from the imposing statue of King Edward VII, seated astride a black horse, which rested there. Although the statue has long since been removed, the name stubbornly lingers. The Kala Ghoda area is home to some of the city's most beautiful buildings - The Elphinstone College, the David Sassoon Library, the Army Navy Building and the once-celebrated Watson Hotel. In an attempt to turn the area into an art district, city conservationists organized the Kalaghoda Fair, an open air craft bazaar, and cultural arena. This festival has become an eagerly awaited annual event.

North of the Crawford market is a predominantly Muslim area, dotted with Chawls (dwelling clusters), and home to some of the busiest and most colourful bazaars in Mumbai. Near Kalbadevi is the Jama Masjid and the Mumbadevi temple, dedicated to the patron Goddess of Mumbai's original inhabitants. It is one of the best places to wander aimlessly.

Mahatma Gandhi's residence in Bombay between 1917-34 has been converted into a museum, which displays pictures and books related to his life. 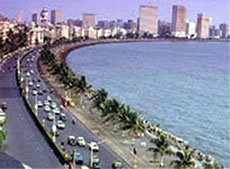 8 kilometers from the centre of the city is the Nehru Planetarium. It shows glimpses into the mysteries and wonders of outer space, and are particularly entertaining for children.

Like the Gateway of India, this structure commemorates the visit of King George V. The building is built in Indo Sarcenic style and is surrounded by beautiful gardens. The central hall features a huge dome which is believed to have been inspired by the Gol Gumbaz. The museum, which opened in 1923, has an impressive collection of artifacts from places such as Elephanta Island, Jogeshwari Caves, and the Indus valley. There is a large collection of terra-cotta figurines, ivory carvings, statues, and miniatures.

The aquarium was opened in 1951 and has an interesting collection of marine and fresh water specimens. Shells, shell craft and fishery by-products are also on display.

This Hindu temple, bordering the Banganga Tank at Walkeshwar, dates back to approximately 1715. Rama is said to have stopped here to rest on his way to Lanka to rescue Sita. Legend has it that the Banganga Tank was created when Rama shot an arrow into the ground, and water sprang forth. Despite its proximity to the sea, the Tank holds fresh water.

This quaint hillside retreat was discovered in 1850 and is the nearest hill station from Mumbai, and provides a welcome respite from the heat and crowds of the city.

Lonavla and Khandala are twin resorts just over 100 kms from the rat race of Mumbai. The towns are perched high on the Western Ghats, and popular tourist destinations. Both towns are famous for their delicious chikki (molasses candy) and chocolate fudge.

Previously known as the Borivali National Park, this protected forest area is on the northern outskirts of Mumbai. The Lion Safari is popular attraction. However, the small population of animals, which includes a few tigers and panthers, faces extinction due to urban encroachment.

This fortified city, built by the Portuguese, separates greater Mumbai from the Indian mainland. The city of Bassein was at its architectural best in 1534, with one cathedral, five convents and 13 churches. In 1739, the city was lost to the Marathas. The ruins of the fort are the only evidence of a glorious past.

The Elephanta Caves are said to date back to the third century. The island was the capital of powerful coastal kingdom and the excavation of the caves from the 6th century hints at the glory of the kingdom. Centuries later, when the Portuguese took possession of the island, they named it after a monolith of an elephant, which they had found there.

Ganesh Chaturthi is widely celebrated all over the state of Maharashtra. During this ten-day long festival, elaborately decorated pandals display large and colourful statues of Lord Ganesh, the God of learning. The festival comes to a close with the immersion of these statues.

The festival of light is celebrated with great fervour. The festival commemorates the day Rama is believed to have returned to Ayodhya after rescuing Sita from Ravana. Homes are aglow with diyas or lamps, and many people burst fireworks. Diwali lamps are specially floated in the Banganga Tank.

Navaratri is a nine-day long festival honoring the manifestations of Shakti, which represent action (Durga), wealth (Lakshmi) and learning (Saraswati). In Mumbai the festival is celebrated with elaborate dandiya and garba dances. Dussehra, the tenth day, marks Ramas victory over Ravana, and is celebrated with Ramlilas, (enactments of the Ramayana).

This religious holiday falls in the third month of the Islamic calendar. It marks the birthday, as well as the death anniversary of prophet Mohammed.

Christians in Mumbai celebrate the birth of Jesus Christ with great fanfare. Many attend the long midnight mass held at churches all over the city. Predominantly Christian quarters are decorated with stars and lanterns. It is a time of family togetherness. Despite the diverse religious beliefs of the city's population, Christmas is seen as a universal festival. In the week between Christmas and the New Year in Bombay, social activities peak and parties abound.