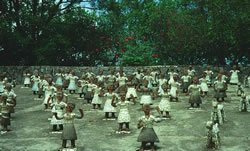 Chandigarh is the twin capital of the northern states of Punjab and Haryana. However, it belongs to neither state. It is a union territory and is directly under the administration of the Indian government. It is one of the youngest cities in India and the main languages spoken are Hindi and Punjabi.

One of the few modern planned cities in India, Chandigarh is divided into 47 self-contained sectors. Architects Albert Mayer and Mathew Novicki drew the initial plans in New York. When the latter died in an air crash in 1950, the work was entrusted to Le Corbusier, a well-known architect and planner.

One can see architectural genius in the neat geometrical design of residential quarters, reinforced concrete structures and self-contained area layouts. Each sector of the city is designed with its own shops, academic, and health care buildings, places of worship, open spaces, greenery and the residential areas.

The city is divided into four major work areas. In the north, the capital complex, consisting of the Secretariat, Legislative Assembly and High Court, with the hills as a background dominating the city. Sector 17, which is the city and district centre, housing the administrative and state government offices, shopping malls, banks and other offices. The west contains the university, and institutions of engineering, architecture, Asian studies and medicine. Finally the east zone, which is the industrial area of the city.

Climate : Summers are very hot. A good time to visit is after the rains, from September to November. Winters in Chandigarh can be quite cold, and days are crisp, smog-free and clear. Sunny winter afternoons are delightful and early mornings are chilly, as are the nights.

Best times to visit : Between September and February.

Places of Interest in Chandigarh

The Open Hand Monument, a symbol of harmony and peace, is situated in Sector 1 along the main road leading into the city. The first thing you'll notice as you are the waist-high wicker fence which says 'for hon'ble judges only'. The best time to visit the Open Hand Monument in the early evening.There is no entrance fee to the monument grounds. The monument is itself at a large distance away from the gate. It almost looks like a bird, slowly rotating on rusted bearings. It is, in fact, a large, open, metal hand pointed skyward. Some locals believe that the hand is supposed to represent the map of Haryana. The base of the monument, which supports the shaft and hand, has been fashioned out of a large, solid chunk of iron sunk several meters into the ground. The metal monument is 14 meters high and weighs 50 tons. The amazing thing about this monument is that it still rotates smoothly about its bearings. 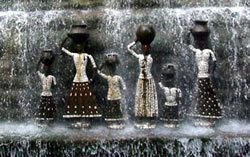 This Rock Garden is probably Chandigarh's premier attraction, a popular spot for tourists. It was created by Nek Chand Saini, a resident of the city, in 1958. He used discarded objects of everyday use like bottles, tin cans, broken plugs, plates, saucers and rocks from the nearby Shivalik mountains to create a 40-acre fantasy labyrinth garden with arched walkways, streams, bridges, grottos, battlements, turrets and sculptures of people and animals. Highlights include armies of stone ducks, papier-mache soldiers, pig iron dancers and goblins. The park is open daily from April to September between 9 a.m. to 1 p.m. and 3 to 7 p.m. Between October and March, it is open from 9 a.m. to 1 p.m. and 2 to 6 p.m.

Also in Sector 1, the Sukhna Lake is an artificial reservoir. A popular place to hang out, one can expect to find residents of the city jogging or strolling along the banks. There is a walking path, a cafeteria, shops and a mini-amusement park and paddleboats. The Sukhna Lake was created in 1958 by damming the Sukhna Choe, a seasonal stream that flows down from the Shivaliks. Storks and cranes make migratory stops at the lake. The lake, incidentally, has Asia's longest water channel for rowing and yachting.

This area, with its monumental public buildings is the site of architect Le Corbusier's most ambitious experiments. The concrete campus and its accompanying lawns are meant to express the strength and unity of independent India. They are also Le Corbusier's way of staging the functions of government in symbolic and geometric relation to one another and to the rest of the city. For tourists, the High Court and the Open Hand Monument are more accessible than the Legislative Assembly and the Secretariat.

The linear Leisure Valley was sculpted from a dried riverbed. It is over 8 km long and runs through most of Chandigarh. The valley consists of several segments, each with its own theme. Flower gardens, jogging tracks and tennis courts dot the trail. There's even an open-air theatre and a sculpture park in the sector 10 section of the Valley.

One of three museums clustered in Sector 10, the Government Museum and Art Gallery contains a modest collection of Indian stone sculptures, miniature paintings and modern art. The miniature paintings belong to the Mughal, Rajasthani and Kangra schools of art while the sculptures are from the Gandharva school of art.

Located in sector 17 B, this gallery was inaugurated in September 1977. It is filled with portraits of Indian freedom fighters, rare documents and recordings of the voices of prominent figures of India's Independence movement. The gallery also contains photographs and facsimiles of original writings, sculptures and ceramic murals.

The Punjab Kala Kendra is the office of the Punjab Arts Council (Punjab Lalit Kala Akademi). Exhibitions are frequently organized in its large galleries and the Council's permanent collection of contemporary art is also on display here.

Museum of the Evolution of Life (Science Museum)

Inaugurated on 14 August 1973, this museum is famous for a large gallery that depicts the origin of the earth and the evolution of life. Other galleries introduce the viewer to astronomy, geology and the world of ancient man. International Dolls Museum Situated in Bal Bhawan, Sector 23, the international dolls museum contains more than 300 dolls from nearly every country in the world. Ten ceramic murals and a large model train complete the display.

The Festival of Gardens

This is a three-day extravaganza, organized in the last week of February. Known earlier as Rose Festival, it was intended to encourage people to walk through the Rose Garden and enjoy the beauty of roses. The festival features performances of music and dance, both classical and folk, flower shows, events for children, exhibitions by local artists, photographers and craftsman and a wide range of other activities.

This is a unique gathering of various poets from all over the country at Chandigarh. Even those who do not ordinarily enjoy poetry look forward to the 'Maha Moorkh Sammelan', or 'Conclave of Colossal Fools'. Chandigarh is the only city in India that hosts such a gathering.

This is the first day of the New Year in the traditional calendar. It celebrates the wheat harvest, and is one of the main festivals for the Sikh community. As the capital of two states, Punjab and Haryana, this day sees festivities organized by both the state governments as well as the Administration of the UT, and by all the residents.

In June, mango growers from all over India are invited to enter their prize fruits in the various competitions. Visitors to the fair can see and taste all the traditional varieties of the fruit as well as the latest hybrids from the agricultural universities. It is also an occasion for agro-industries, and food industries processing mangoes into jams, pickles and canned fruit to display their products.

Held in the first week of August, this traditional festival is celebrated by women only. The Rock Garden with its swings and pavilions is the venue for the festivities and the day is basically a grand picnic with songs and dances, purchase of new bangles and painting of hands with 'mehandi'