Ahmedabad was named after the Sultan Ahmed Shah, who built the city in 1411. Also called the "Manchester of the East", today, it is one of the most highly industrialized cities of India.

Historically, Ahmedabad was a major base camp during the Indian freedom struggle. Mahatma Gandhi built the Sabarmati Ashram on the outskirts of the city, from where he guided India to freedom. Today Ahmedabad, more than any other Indian city represents non-violence and peace.

Ahmedabad is also the textile city of India. Though the city has developed more as a business and commercial centre, it also holds attraction as a centre for the study of Indo-Saracenic architecture, a style that fuses elements of Hindu and Islamic architecture.

The old city of Ahmedabad is dotted with labyrinth of bylanes called polls. The exquisitely carved wooden mansions are beautiful examples of the craftsmanship of the time.

Although it is no longer the capital of Gujarat, Ahmedabad remains the second largest industrial city in western India.

Climate : Ahmedabad's climate is hot and humid. The temperature during summer months soars to 45 degrees and in winter dips as low as 5 degrees. It rains frequently, making the atmosphere humid and sultry.

Best times to visit : Between the months of October and March.

Places of Interest in Ahmedabad

This man-made lake was developed by Qutub-Ud-Din in 1451. Today it is a popular recreational spot for the residents of Ahmedabad. The lake is surrounded by beautiful gardens and also houses an aquarium on its banks. Located in the middle of the lake is a beautiful island palace that was visited frequently by Nur Jahan and Jehangir during the Mughal period.

These arched gateways were built by Sultan Ahmed Shah. They formed the royal entrance to the Maidan Shah or Royal Square. From here the Sultans watched the processions from the palace to the Jama Masjid. 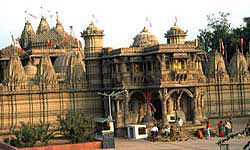 Embellished with intricate carvings and built in white marble, the Hatheesing Jain temple is one of the most ornate Jain temples in Ahmedabad. It was built in the 19th century by a rich Jain merchant and is dedicated to Dharmnath, the 15th Jain Apostle.

The Sarkhej Roza is one of the most elegant and unique architectural complexes in the city. These buildings do not have arches and there has been a remarkable use of pierced stone trellises.

Near the Ahmedabad railway station is the mosque of Sidi Bashir. People come to this mosque to see the pair of shaking minarets. The amazing thing about the minarets is that if one is shaken the other also rocks in sympathy. It is said that the minarets were built in this way to avoid damage during the earthquakes. The British partially dismantled the pillars in an attempt to understand how they were built. However, they were unable to find out, nor could they replace dismantled parts.

One of the most famous mosques of Ahmedabad, Sidi Saiyad Mosque was constructed in 1571. The mosque has ten semicircular windows, each carrying a splendid filigree screen. The intricate carvings on the windows represent the intertwining of the branches of a tree.

This well was built in 1501 to provide a cool resting place and water to the travellers. The stepped well is among the finest examples of Gujarati architecture. Even on the hottest days, the well remains cool.

Built in 1423, the Jama Masjid is one of the most beautiful mosques in western India, providing a fine example of exquisite workmanship.

Another beautiful mosque is the Rani Sipri mosque, built by the Queen of Mahmud Shah Begda in 1514. After her death she was buried in the premises of the mosque itself.

This ashram, founded in 1915, was the starting point of Mahatma Gandhi's Dandi Yatra in protest of the British salt laws. It was an important base for India's freedom movement.

This museum of textiles displays antique and modern textiles. It is housed in a carved wooden haveli and exhibits rare tapestries, wall hangings and costumes. Some of the old weaving machines are also kept here. The museum's collection dates back to the 17th century and it also has an excellent reference library on textiles.

This museum displays some of the finest examples of the traditional arts & crafts of Gujarat. A must-see for those interested in folk art.

Makar Sankranti
This festival is celebrated all over the country, but in Gujarat and Ahmedabad in particular the day is celebrated as a Kite Festival. This festival has today acquired an international flavour, with people from round the globe coming here to enjoy the kite flying. Exotic kites in different shapes and sizes cover the sky on this day every year.

Navratri
When Bengal is celebrating the Durga Puja, Gujarat celebrates Navratri with much fanfare and gaiety. Young boys and girls perform the Garba and Dandiya Ras dances. Celebrations carry on for nine days and culminate on the tenth day (Dussehra).

Rath Yatra
In the month of June or July, a massive procession chbegins from the Jagannath temple in Ahmedabad. A chariot carrying idols of Lord Krishna, Balram and Subhadra leaves the temple amid chanting of sacred Vedic hymns.