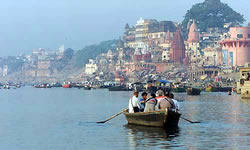 Varanasi, or Benaras as it was earlier called, sacred to the Hindus has many names: Kashika, or 'the shining one' referring to the light of Shiva. Avimukta, meaning 'never forsaken', refers to the city that Shiva never deserted. Anandavana, the 'forest of bliss', and Rudravasa, the place where Shiva (Rudra) resides. This city has held many a true sceptic captive, despite the atmosphere being dirty and crowded, badly planned and chaotic.

The holy river of the Hindus, the Ganga traces a great arc through Varanasi, perfectly aligning the river bank with the rising sun. A dip in the Ganga is considered to be a rite of purification, with the power to purge all sins. The ultimate pilgrimage Varanasi, or Kashi or Benaras as is believed to be the place that provides man the answers to the penultimate quest for salvation and enlightenment.

Wake up early and hire a boat, watch the sun rise over the famous ghats and close your eyes before you open them again to let the sight stay with you. For a city that is considered ancient, there is no temple, no monument older than 3 centuries ago. Credit for this shame goes to the destructive Emperor Aurangzeb and the carnage he wrought here. But for all of that, the city gazes at you calmly and waits for you to realize the answers to all your questions and at Varanasi, this seems completely possible.

Climate : Varanasi ensures that its pilgrims have a hard time at least by way of the weather. Hot and humid summers make you swelter at 45°C. the monsoons offer some respite but not much at 37°C. Winters are the best, with temperatures at 30°C.

Best times to visit : Other then the peak of summer from May to June and the monsoons from July to August, plan a trip anytime.

Places of Interest in Varanasi 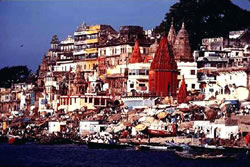 Many a story has been told of the Ghats of Varanasi. Quite an amazing experience as you either walk along or brave the waters. This is the real Varanasi, with its godmen in saffron, the echoes of the shlokas, bathing pilgrims with prayers on their chilled and stuttering lips, the shoreline with flames lapping up towards the sky where the dead are sent to heaven - a thousand sights and smells assault and overwhelm you. The more famous of the Ghats are the Dasashwamedha, Manikarnika, Assi, Panch Ganga and Harishchandra Ghats.

Dedicated to India, this temple was inaugurated by Mahatma Gandhi. Inside, there is a marble relief map of India and other related memorabilia. The symmetry of design and scale of the map catches your attention.

Said to date back to well before the birth of the Ganges, Gyan Kup literally translates into the 'Well of Knowledge and Wisdom'. The kup is conveniently situated next to the main temple and the water from the well is believed to 'indicate the highest spiritual illumination'. 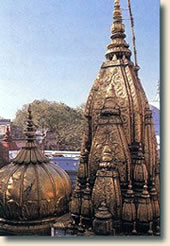 With the only constraint being that only Hindus are allowed inside the temple, the Vishwanath Temple was built in 1777, by Ahilya Bai Holkar of Indore. Aurangzeb's destruction of the temple and the rebuilding of it on the same site gives its history value and the temple has been the principal Shiva Temple in Varanasi for more than a thousand years. Known as the 'Golden Temple', because of the 800 kgs of Vishwanath Temple gold, which adorns its shikharas, the roof was gold-plated by the blessing of Maharaja Ranjit Singh in 1835. In the inner sanctum, the shivling is enshrined atop a golden altar.

In an act that was typical of its eccentric and destructive builder Aurangzeb, this great mosque was built with materials salvaged from plundered Hindu temples. The monument is an architectural wonder, with minarets, which are 71 m in height. It is only the rear portions of the mosque that give away its Hindu origins.

The BHU, as it is popularly known, was founded in 1917 by well-known nationalist Pt Malviya. The largest residential university in India, it houses an excellent Sanskrit School as also a museum within its campus, the Bharat Kala Bhavan Museum. The Museum has an amazing collection of old manuscripts, ancient sculptures and paintings.

The ancestral home of the former Maharaja of Varanasi, this 17th century fort-palace was built by Maharaj Balwant Singh and is situated across the river to the south of the city. The fort has a temple and a museum within the grounds, the temple being dedicated to Veda Vyasa, the author of the Mahabharata, who stayed briefly at the Ramnagar Fort. An interesting array of ornate palanquins, gold-plated howdahs and weapons are some of the artifacts on display.

Held from October to December, this festival is held at the Annapurna Temple in Vishwanath Gali. On this occasion, small mounds or 'hills' are made of sweets and distributed to the devotees.

Held during the months of October and November, this is a great time and event to be a part of. A festival of music and dance, there is great enthusiasm both on the side of the dancers as well as the onlookers. The music is fast and then slows down to accommodate the scenes that the dances portray. Sometimes swinging and simply graceful at other times, there is excitement in the air.

This festival, dedicated to the river is celebrated from April to June. At this time, a fair is held at Manikarnika Kund above Manikarnika Ghat. In thanks and worship of the river, people string huge garlands, go out in boats and float them across the river.

Like most of the festivals celebrated with lights, Kartik Purnima, celebrated from October to December is a beautiful sight. Held at Panchganga Ghat, you can see people come and leave behind lamps, which gently float in the river. At times when the crowd thins, all you can see is the gleaming river and the hundreds of earthen lamps, bright and burning in little dots all across the river.

January to March sees the grand celebrations of Maha Shivratri or the night of Shiva. This is a night where people throng the temples in Varanasi, since sleep is forbidden on this night. There is a lot of noise and excitement as people sing with abandon and pray with fervour. The best place to be in Varanasi on this night is the Vishwanath temple.

Like all parts of India, Navratri is a much celebrated festival in Varanasi too. From October to December, there are constant activities in the temples of the city and on the lanes as well.

Celebrated in October, the Ramleela is part of folklore and marks the glory of Lord Rama. It is held both in the city and at Ramnagar. Performances and music make for an exciting time