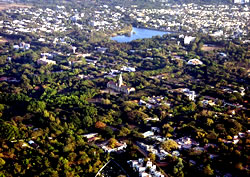 Bangalore is one of Asia's fastest growing cities. Situated at an altitude of 920 metres above sea level, Bangalore is the principal administrative, cultural, commercial and industrial centre of the state of Karnataka. Spread over an area of 2190 square kilometers, Bangalore enjoys a pleasant and equable climate throughout the year. Tree-lined streets and abundant greenery made it the 'Garden City' of India.

However, since local entrepreneurs and technology giant Texas Instruments discovered its potential as a high-tech city in the early 1980's, Bangalore has seen a major technology boom and is now home to more than 250 high-tech companies, including homegrown giants like Wipro and Infosys. The erstwhile garden city has now been pegged the 'Silicon Valley' of India.

To give you a little background, Bangalore was founded by Kempe Gowda in the early 16th century. Two centuries later, it became an important fortress city under rulers Hyder Ali and Tipu Sultan. The ruins of those periods can still be seen on the Bellary Road, at Lal Bagh, Ulsoor and Gavi Gangadhareswar Temple.

The people in the city are warm, hospitable and friendly. Bangalore is generally regarded as a place that most visitors like to chill out in. Not to say that it has nothing for the people interested in history. Along with the modern day pubs, discos and hangouts, one can still see remnants of the older Bangalore. All in all, a lovely city to visit.

Climate : One of Bangalore's most attractive features continues to be its pleasant weather. Like we said earlier, Bangalore is not inclined to extremes. It meets the season's expectations, which means, it is warm in the summer, chilly in winter and the monsoons visit regularly.

Places of Interest in Bangalore 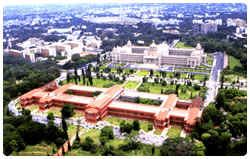 Located at the northern boundary of Cubbon Park, this majestic building, with a total plinth area of over 5,00,000 sq. ft is built in a Neo-Dravidian style. It houses the Secretariat, the State legislature and several other Government offices. The gleaming white domes, pillars and archways resemble the architectural pattern of Mysore's old palaces. The huge, carved doors of the cabinet room are made of pure sandalwood. The entire building, when floodlight on Sunday evenings, presents a truly breathtaking picture.

These 240-acre gardens were laid out during the Muslim era (18th century) by Hyder Ali and Tipu Sultan, 200 years ago. They contain the largest collection of rare tropical and sub-tropical plants with many awesome century-old trees. Fountains, terraces, lotus pools, rose gardens and a deer park surround the magnificent glass house built in 1840, on the lines of London's Crystal Palace. The Annual flower, fruit and vegetable shows are regularly held here. Lal Bagh also houses the offices of the Karnataka Horticultural Society that renders free advice to those interested in flowers and gardens. A giant Electronic Quartz Flower clock is also in the garden.

Planned and laid out in 1864, this beautiful 300-acre park contains the public library and the museum. The illuminated "fairy fountain" and the elegant graeco - colonial style buildings add to the beauty of this park. The imposing red Gothic structure within this park is Seshadri Iyer Memorial Hall, which houses the public library. Also situated here are the High Court, the Government Museum, the Technology Museum, the Govt. Aquarium and the Jawaharlal Bal Bhavan.

Situated opposite the City Market, the Fort is noted for its beautifully carved Islamic-style arches on the gate walls, and for the well-preserved Ganesha Temple within its precincts. One of the temple's outer walls carries an exquisite carving of Sri Krishna playing his flute, and within, there is a fine statue of Lord Ganesha. Originally built in mud by Kempe Gowda in 1537, the Fort was extended and fortified by Tipu Sultan. He preserved the Ganesha Temple as a testament to his religious tolerance. It is open to the public from 6 a.m. to 6 p.m.

Situated near the fort, construction of this palace was begun by Tipu Sultan's father Haider Ali, and completed by Tipu himself in 1791. It resembles the Daria Daulat Palace at Srirangapatna, Tipu's capital. It was known as `Rashk-e-jannat' - the Envy of Heaven. Constructed largely of wood, it is known for its five elaborately decorated arches surmounted by exquisite minarets, and paintings on the walls and ceilings. It is open to the Public from 6 a.m. to 6 p.m.

Bangalore has some beautiful temples. Adjoining Tipu's summer palace is the Venkataramanaswamy Temple, a 300-year old temple built by the Wodeyars and still in very good condition.

South of Bangalore in Basavangudi, is the Bull Temple built by Kempe Gowda. The deity is a massive 15-foot Basava or bull, which was believed to have been the vehicle of Lord Shiva. The cause for wonder about this Nandi is that it has been carved from a single boulder.

Another impressive temple is the Gavi Gangadhareswara temple, an unusual cave temple. It has been designed in such a manner that, on the festival of Sankranti, a local festival, the rays of the sun pass between the horns of the Nandi placed outside the temple, illuminating the image of Lord Shiva.

Another temple dedicated to Lord Shiva is the Someshwara Temple built by Kempe Gowda in Ulsoor. 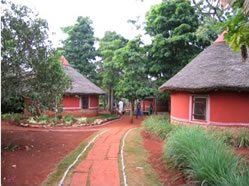 35 kms from Bangalore at Hesaraghatta is the famous Nritya Gram, a centre for dance that imparts extensive training in seven dance disciplines and two martial art forms to residential students. The Nrityagram celebrates the Vasantha Habba (the spring) every year. Renowned artists are invited to come and perform in a night-long gala, open to the public. The Hesaraghatta Lake, a man-made lake, near the village is also a popular tourist spot.

Just 21 kms from the city and easily accessible by road is the Bannerghatta National Park. A part of the Bannerghatta forest, the park houses a mini zoo, a crocodile farm, lion and tiger safari parks. Situated 60 kms from Bangalore, at a height of 1478m above sea level, is the Nandi Hills resort. What used to be the favorite summer getaway of Tipu Sultan, is now a popular picnic spot with its awesome fort, sprawling lawns and two ancient temples.

The Shri Satya Sai Baba ashram is the chief attraction at Whitefield. It is now more or less a suburb of Bangalore, with increased access lines and more people moving into the neighborhood. The ashram is called Brindavan and any public transportation will take you there, though auto rickshaws may make a bit of noise about the extra charge you ought to pay. It is an interesting place, and the sage has quite a few interesting aspects to his personalities. He is very revered and many people believe him to be an incarnation of the earlier Sai Baba of Shirdi, a Hindu saint of older days.

This is a hill resort near Bangalore whose solitude has not been tampered by commercialization. The weather is very pleasant and though a far cry from the misty Himalayan hill-stations,Nandi Hills has a very pleasant ambience about it a nice place to chill out in if you are in the vicinity. For one, it has been a popular hill retreat right from the days of Tipu Sultan who is said to have visited here occasionally. Tipu's drop, a 600-metre high cliff offers a fantastic view of the plains down below. Ideal picnic spot.

A little away from the city is Ramohalli, a picturesque picnic spot, that boasts of a 400-year old sprawling banyan tree, spread over 4 acres. The region around Bangalore is dotted with gigantic rock formations, the two notable ones being Shivaganga (4599 ft. high) and Savandurga. The latter used to be a fortress and the hideout of Kempe Gowda.

Mysore is just 139 kms by road from Bangalore. It was the capital city of Hyder Ali, Tipu Sultan and the entire Wodeyar clan. Mysore's prime attractions are the Mysore Palace, the Chamundi Hills, the famous Brindavan Gardens, the Jayachamarajendra Art Gallery located in the Jaganmohan Palace, the Mysore Zoo and St. Philomena's Church.

15 kms from Mysore is the old capital of Tipu Sultan, Srirangapatna. Its fort bears witness to the Tiger of Mysore's last battle against the British. His mausoleum, the Gumbaz, which sports ivory inlaid doors and the famous tiger-striped emblem is also nearby. Near Srirangapatna is the Ranganathittu Bird Sanctuary.

40 kms away from Mysore is the Somnathpur Temple, a star-shaped structure built in 1260 A.D, an outstanding example of Hoysala architecture.

49 kms from Bangalore city, Ramanagaram is famous for its rock formations, a great attraction for rock climbers. Ramanagaram is also an important silk cocoon market.

50 kms from the city center is a hill which provides a breath-taking view of the the nearby areas. There are two famous shrines dedicated to Lord Gangadeshwara and Goddess Honnadevi.

194 kms from Bangalore is Hassan, from where one can go to Belur, Halebid and Shravanabelagola. Shravanabelagola is a famous Jain pilgrimage with a 17m high monolith of lord Bahubali standing tall. 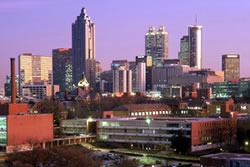 For those that have business and more business on their minds, the International Tech Park in Bangalore offers a superb business advantage to corporations seeking a foothold in India, one of the world's biggest emerging markets. The futuristic Park is built to exacting international standards, supported by state-of-the-art infrastructure. Amidst a refreshing and aesthetically appealing environment, the Park offers a one-stop solution integrating office, production, commercial, residential and recreational needs in a single location. The International Tech Park is meticulously designed and built to suit the requirements of international hi-tech companies in the field of information technology, software development, electronics, telecommunication, research and development, financial services and other non-polluting hi-tech industries.

Electronics City is an industrial park spread over 330 acres exclusively meant for electronics industries. It houses more than a hundred industries, including IT industry leaders like Motorola, Infosys, Siemens, ITI and Wipro. The area is maintained by Keonics, which provides the necessary infrastructure.

All the major Indian festivals are celebrated here with pomp and gaiety. But the place also celebrates some regional festivals.

The new year is celebrated more enthusiastically than any other. With the mix of people in Bangalore, it is common to see Christmas and Ramzan celebrated with equal vigour.

Listed among some of India's more offbeat festivals, the Karaga Festival is one that tests an individual's sense of balance - both that of the body and of the mind. The sight of people trying to balance a series of pots on their heads and doing so with consummate ease is quite a sight.

If you think the idea of balancing pots on one's head as a festival is way out, this next one takes the cake, or the nut as the case may be. This is a groundnut eating festival! They also distribute 'Alkasetzers' among the contestants after the festival is over