Indian Dances illuminate & express India's culture in a direct manner, playing on the sensibilities of the onlooker.

India offers a number of classical dance forms, each of which can be traced to different parts of the country. Each form represents the culture and ethos of a particular region or a group of people 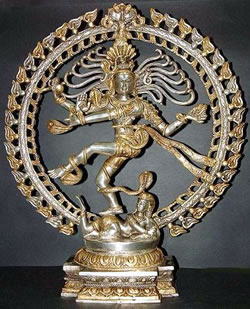 Sanskrit: “Lord of Dance”, the Hindu god Siva (Shiva) in his form as the cosmic dancer, represented in metal or stone in most Saiva temples of South India.

One of the most enduring symbols of India is the figure of NATARAJA - Shiva (The King of Dancers). Shiva's cosmic dance is believed to encompass creation, preservation, and destruction and this idea has been embedded in Hindu thought and ritual since the dawn of civilization.

He holds a small drum (DAMARU) in his upper right hand. His lower right hand shows the fear-negating gesture (ABHAYA), his upper left hand is in half-moon pose (ARDHACHANDRAMUDRA) which holds a tongue of flame which is the fire (AGNI) that finally destroys the world and is then quenched in cosmic waters. Thus the hand holding the drum and the one holding fire balance the forces of creation and destruction. The second left arm is held gracefully across the chest (GAJAHASTAMUDRA) with the hand pointing to the uplifted foot, denoting favor or grace for the devotee.

One foot rests on APASMARA or MAUYALKA, the embodiment of human cruelty and ignorance. Surrounding Shiva's figure and emanating from him is an immense aureole of flames (PRABHAMANDALA) representing the vital processes of nature, sustained by the tremendous energy of the dancing God within.

The flames represent the transcendental power of wisdom and truth, as well as the mantra 'OM' which signifies the totality of creation. Also known as the ANANDA TANDAVA, this dance is a metaphor for the belief that life is essentially a dynamic balancing of good and bad, where opposites are interdependent. The dance of Shiva is the dance of life. 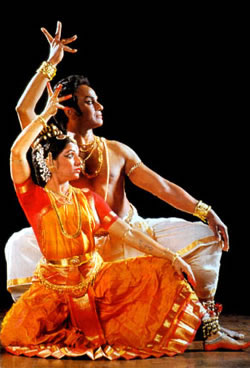 Indian classical dance is the embodiment of a whole range of expressions, which include fantasy and yogic discipline. The different forms represent the meeting point of three arts: music, drama and dance. Though highly defined and codified, they are perceived primarily as a form of worship, as homage to the almighty. Their classicism lies in the continuity of an unbroken history of over five thousand millennia, one which overwhelms yet inspires.

Using the body as a medium of communication, the expression of dance is perhaps the most intricate and developed, yet easily understood art form.

Indian dance is a blend of

Classical Indian Dances are usually always spiritual in content, although this is often true also of Folk dances. The most popular classical styles seen on the Indian dance stage are Bharatanatyam of Tamil Nadu, Kathakali and Mohiniyattam of Kerala, Odissi of Orissa, Kathak of Uttar Pradesh, Kuchipudi of Andhra Pradesh and Manipuri of Manipur