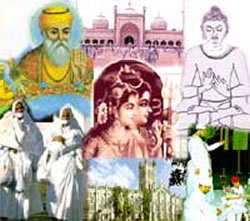 India is a grand country. It is the seventh largest country in the world and the second most populated country in the world. Many see India as a sub-continent rather than a country. There exist in different parts of India, different cultures, languages, manners as well as different historical backgrounds and influences of the same historical events. The official name for the country is Republic of India.

India has 15 major languages and 844 different dialects. The Sanskrit of the Aryan settlers has merged with the earlier Dravidian vernaculars to give rise to new languages. Hindi, spoken by about 45 per cent of the population, is the national language. English has also been retained as a language for official communication. Indian literature dates back several millennia to the hymns of the vedic Aryans.

India is one of the few countries on earth in which the social and religious structures that define the nation's identity remain intact.

The most dominant religion in India today is Hinduism. About 80% of Indians are Hindus. Hinduism is a colorful religion with a vast gallery of Gods and Goddesses. Hinduism is one of the ancient religions in the world. It is supposed to have developed about 5000 years ago.

Around 500 BC two other religions developed in India, namely, Buddhism and Jainism. Today only about 0.5% of Indians are Jains and about 0.7% are Buddhist. In ancient times Jainism and specially Buddhism were very popular in India. Indians who accepted Buddhist philosophy spread it not only within the Indian sub-continent but also to kingdoms east and south of India.

Indian culture is oriented primarily around its Hindu roots. Many Hindu institutions, including the strict caste system with its dietary proscriptions, still have wide-ranging effects on secular Indian society. The caste system is a rigid, and often harsh, social system, allowing little mobility out of the position to which a person is born. The term "caste" was first used by 16th-century Portuguese traders; derived from the Portuguese "casta," denoting family strain, breed, or race. The four original castes have been subdivided over many centuries, until today it is impossible to tell their exact number. Estimates range from 2000 to 3000 different castes established by Brahmanical law throughout India, each region having its own distinct groups defined by craft and fixed by custom.

A list of languages as spoken in the respective States -