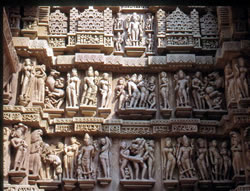 Once guarded by swaying date palm trees, which gave the city of Khajuraho its name, the city is a study in art and sculpture. Indeed, the Chandela Temples form the centre of Khajuraho with its myriad graceful forms that continue to evoke shock, surprise, awe and admiration among a thousand other feelings.

An outstanding example of Indo-Aryan architecture, the art on the temple walls is an elegant combination of intricacy and simplicity. The city traces its origin to the 10th century when it was the bastion of the Chandela dynasty.

The Khajuraho of today is more familiar to today's monuments to commercialization - hotels, restaurants and shops - signs of ordinary civilization. The past with all its grandeur, in the form of the temples gaze benignly at a city that continues to thrive because of what its rulers gave it.

Of course, the city comes alive every year during the Dance Festival in March, when the maestros of classical dance, Birju Maharaj and Kelucharan Mohapatra and their disciples perform against the dramatic temple backdrop. Beyond doubt, Khajuraho is not an Indian destination you can afford to miss.

Climate : Khajuraho's climate is quite extreme, with drastic shifts in day and night temperatures along with minimal rainfall. Summers are a hot 45°C and winters pleasant at 27°C.

Best times to visit : With summer too hot to be advised, winter is a good time to visit. As also March, which is when the annual Dance Festival takes place.

Places of Interest in Khajuraho 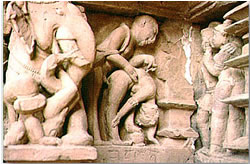 Chandela architecture was obviously at its peak when the temples were built. Depicting scenes of gods and goddesses, valiant warriors, animals and people, the sculptures and carvings are often shown engaged in acts of love. This portrayal of sensuality and erotica, while awing some and shocking others, not once is vulgar. The beauty of this art in fact enhances the purity of temple art forms.

The temples are a series of towers each higher than the other, culminating in a soaring shikhara. The inner sanctum sanctorum is just as elaborately carved as the exterior. It is amazing that these blocks have simply been fitted together since at the time of being built, there was no mortar. 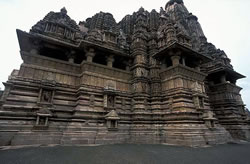 The Western Group of Temples is the most elaborately carved of the three. The temples here are mentioned here in brief. The Lakshmi and Varaha Temple is dedicated to Lakshmi and the Varaha (boar) avtaar of Vishnu. The Lakshmana Temple, intricate in its workmanship, the Kandariya Mahadev, largest and architecturally the most perfect, where the interior has 872 spectacularly carved statues, the Mahadeva Temple is the smallest; the Devi Jagadamba Temple was first dedicated to Vishnu, then Parvati and finally to Kali.

This group, other than housing the other temples also contains the Jain Temples. Of the attractions, there is the Parasvanath Temple, the largest and finest Jain temple in the city. Comparatively the Adinath Temple is smaller in size with its sculptures forming a tri-band formation, similar to Hindu temples. The Shantinath Temple is again comparatively modern and was built a century ago with raw materials from older temples. The Ghantai Temple is now mostly in ruins with only the graceful carvings of the bell and chain motifs remaining. The Javari Temple dates back to AD 1075-1100 and is dedicated to Vishnu. The Vamana Temple is slightly older than the Javari Temple, standing alone in the middle of a field. And there is the Brahma and Hanuman Temple, the name confusing since the temple is actually dedicated to Vishnu.

The two temples here are the Duladeo Temple, 1 km away from the Jain enclosure. Not very impressive, this temple does not seem to have received the attention the others did. The other, the Chaturbhuja Temple is south of the river and is quite dilapidated. It houses an image of Vishnu.

For those who find that they simply cannot get enough of the temples and its grandiose display of temple art forms, here is a good place to continue being impressed. Situated a short distance from the Western Group, the museum showcases statues and figurines, a lot of which have been recovered and restored from the ruins of the temples.

This is again a must visit and in here, you will feel like everything you see is a must-buy. This 10-acre complex has traditional handicrafts from various parts of India. A lot of it is for sale, so get your shopping bags ready. If you are lucky, the time you visit will coincide with some cultural festival or the other being held at the amphitheater, located within the Shipagram complex.

This festival takes place in April but the preparations for it begin early in the summer. People break old earthen pots and buy new ones to cool water in to help beat the summer heat. There are prayers offered at the Banyan tree on the banks of Premsagar. This festival coincides with the 'doll weddings' at the base of the tree, which is another interesting experience if you are around.

Durga, the goddess of power and the earth is in focus these nine days. Decorative tents are put up with her idol in all sizes. People vie with each other for the grandest tent and on the 10th day, her idol, along with pots of jawara, are immersed in village lakes and ponds. The event coincides with Dussehra, another important festival. But unlike the rest of North India, no effigies of the demon Ravana are burnt here. Instead, the day is spent putting an end to old enmities, as foes offer paan (betel leaf) to each other in friendship. Ramalilas (dramatic interpretations of Rama's life) are enacted for a fortnight.

Celebrated in August as the birthday of Lord Krishna, there are decorated scenes of his birth called jhankis on display. Since mythology has it that Krishna was born in prison, the best and most elaborate jhankis (tableaux) are displayed at local police stations, which use the opportunity to enjoy a week-long cultural festival.

Also held in August, Kajalia is celebrated the day after Rakhi, a festival that celebrates the bond between brothers and sisters. Wheatgrain soaked for nine days in earthen pots sprout into long grass called kajalia. Mid-morning, these are taken, in a merry procession, with much song and dance and immersed. This is followed by a shooting competition in which targets are placed at the farthest end of the lake.

While the other festivals are localized, the Khajuraho Dance Festival attracts visitors from around the world. The first and longest running dance festival of its kind in the country, this Dance Festival celebrated its 25th anniversary this year. Held between the 14th and the 20th of February every year, the backdrop of the Chitragupta Temple is the perfect setting. For seven days, the country's most accomplished classical dancers, as well as upcoming talent exhibit their talents and hold an international audience spellbound.

This is a rather recent festival that was started by Teamwork Films in October last year. Hoping for this to become an annual event, last year for two days, the town resounded to the Maihar folk band near the Chhatri, the army band in the plaza, and classical music on the banks of the Shivsagar Lake. A three-day festival is planned in early November 2000. The wonderful intention of this event is to provide a platform to new and upcoming talent.

Held from March to April, this heralds the birthday of Lord Rama. Preparations begin nine days earlier when jawara (barley) seeds are sown in earthenware pots. Around 5 in the evening, men, women and children, dressed in their finery, take their jawara sprouts to the Devi temple at Premsagar and then go on to Shivsagar to float it.

The symbolic wedding of Shiva and Parvati is celebrated with much fervour as villagers walk long distances to worship at the Matangeshwar Temple. There are processions of the holy couple taken out to do the rounds in the village. There is a lot of fanfare and the city wears a festive air for a whole fortnight. There are bhajans and a lot of singing on the night of the festival, as people entertain themselves and each other and stay awake the entire night.