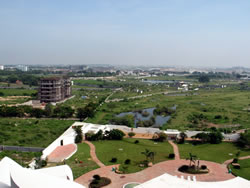 It is rare to come across a place that welcomes the 21st century with an 'adaab'. Hyderabad is one such place. There is so much here to awe the senses. From the magnificent food to the majestic monuments, from its terrific landscapes to a populace steeped in respect and tradition. Consisting of the twin cities of Hyderabad and Secunderabad, Hyderabad is also the capital of the state of Andhra Pradesh. Once the largest princely state in India, Hyderabad had its own flag, currency, railway, and postal system, before being incorporated into the Indian nation.

With a rich history, Hyderabad boasts of some fine examples of Qutub Shahi architecture - the Jami Masjid, the Mecca Masjid, Toli Masjid and of course, the impressive symbol of Hyderabad, the Charminar.

A unique feature of the city is that it is the only city in the south, where the major language spoken is Urdu.

Home to the Nizams, reportedly, the world's richest royals, Hyderabad is also home to famous folk arts like shadow puppetry and kuchipudi.

Climate : Maximum temperature is 38º C, minimum temperature 12º C, annual rainfall less than 200 mm. Hyderabad is fairly warm throughout the year and does not receive much rainfall in the monsoon. Temperatures do come down in winter with September to December being the best times to visit. June to November are monsoon months. The best time to visit then is during or just after the monsoons.

Best times to visit : Though the climate is suitable for visit anytime of the year, the best season is between October-February. Just avoid June when it is too hot to sightsee.

Places of Interest in Hyderabad 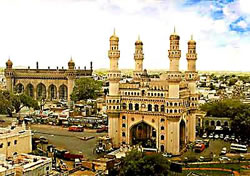 The principle landmark of Hyderabad is the Charminar (four towers), the massive arch built by Mohammed Quli Qutub Shah in 1591 to commemorate the end of a devastating epidemic of the plague. There is a small mosque on the second floor, which is the oldest in Hyderabad. In the south-east corner is a small Hindu shrine honoring Laxmi, the goddess of wealth. Each evening, the arch is illuminated and is a sight worth seeing.

One of the largest mosques in the world, the Mecca Masjid is said to accommodate upto 10,000 worshippers. The foundation of the mosque was laid during the reign of Mohammed Quli Qutub Shah in 1614, but was completed only in 1687, when the Golconda Kingdom was annexed by Emperor Aurangzeb.

Hyderabad also boasts of one of the largest zoos in India, the Nehru Zoological Park. It is spread over 1.2 sq. kms of landscaped gardens and houses about 3000 animals. There's a prehistoric animal section, a toy train ride around the park, a lion safari and a nocturnal section.

One of Hyderabad's prime attractions is the Salar Jung Museum, the world's largest collection by a single individual, Sir Yusaf Ali Salar Jung III. The 36 rooms, house around 35,000 exhibits from all over the world including sculptures, illuminated manuscripts, unusual collections of jade, marble statues, rare manuscripts, Persian miniature paintings, Chinese porcelain and other objects d'art. The collected items in the museum could be far better classified because a lot of the really good pieces of art need to be hunted for. Whatever the inevitable drawbacks of a one man collection, a must visit. The museum is closed on Fridays.

The Birla Mandir stands on a hill overlooking the south end of Hussain Sagar. It is a splendid temple built entirely out of white marble. The Birla Planetarium is also quite a crowd-puller.

A short distance away from the city, looms one of the most magnificent fortresses in India, the Golconda Fort. The fort dates back to the time of the Qutub Shahi kings, though its origin has been traced to earlier periods, to the reign of the Yadavas and later the Kakatiyas. The fortress is built on a granite hill 120 metres high. Its gates are studded with menacing iron spikes, intended to discourage elephants from battering them down.

What is unique about this fort is its system of acoustics. The sound of hands clapped at the entry gate can be heard quite clearly at the top of the hill, at a height of 61m. The stately tombs of the Qutub Shahi rulers lie just outside the outer wall of the Golconda fort. They lie amidst beautifully kept gardens and a number of them have intricately carved stonework.

Hyderabad has a rich cultural heritage, which encloses within itself an amalgam of various religious and cultural communities. While many of these are common with the rest of the country, some are celebrated with a distinct touch that carries the flavor of the city. One has to remember that Hyderabad is a predominantly Islamic state and therefore, it stands to reason that the festivals that stand out will be those of the Muslims. But then again, like the rest of India, there are festivals that are celebrated by all, regardless of one's own religion.

In January, Til Sankranti marks the entry of the sun into the northern hemisphere. The day, held auspicious by Hindus is marked by worship of the Sun God. Houses are decorated with rangolis. This festival is also known as the harvest festival.

Ugadi (March/April) is the Telugu New Year. On this day, houses are cleaned, painted and a 'toran' or string of mango leaves is strung up in front of each house.

Muharram (June-July), the day of martyrdom of the grandsons of Prophet Mohammad is celebrated with piety. Traditionally, the Muharram period lasts over a month and is observed by Muslims and Hindus with temperance. On the 8th and 10th days of Muharram, people of all religions pay respect at Chote Hazrat ki Dargah, inside Devan Devadi, in Hyderabad.

Bathkamma (October/November) is special to the Telangana region. In the month-long festival, Goddess Bathkamma's idol is worshipped and taken to rivers and lakes and floated in the evening.