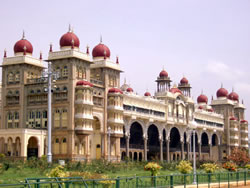 Mysore is a major craft centre with numerous shops selling an incredible range of ivory, sandalwood, rosewood and teak carvings and furniture. Until independence, the city was the seat of the Maharajas of Mysore, a princely state covering most of Karnataka. The 10 day Dussehra festival is one of the major attractions, culminating in the long procession of caparisoned elephants, liveried retainers, cavalry. flower-bedecked images of deities, complete with bands and clouds of incense.

Places of Interest in Mysore

This is a 1150m hill that is named after Goddess Durga, the consort of Lord Shiva, who vanquished the Demon Mahishasura. From the top of the hill, one can have a panoramic view of Mysore.

Built enormous and lavish in 1911 to replace the old palace in the fort that burned down, the Maharaja's Palace is an extravagance of domes, arches, turrets and sculptures. It is a fine example of Indo-Saracenic style of architecture. With vast pillared corridors and stately halls, carved ceilings, intricate mosaics, carving in ivory, stone and wood, life like paintings, antique royal weapons, this palace is a must in every visitor's itinerary.

Built in the 12th century, a fine example of Dravidian temple architecture, Krishnaraja Wodeyar renovated the temple in 1827. The temple tower is 40m high with seven storeys. The deity is Goddess Durga. On the way to the temple, there is a monolithic statue of Nandi Bull and a morter statue of Mahishasura.

>The island fortress of Hyder Ali and his son Tipu Sultan is picturesquely located in the River Cauvery. Within the fort walls that still carry the poignant scars of Tipu's last stand against the British, are a mosque and the Ranganathaswamy Temple. The 'Daria Daulat', Tipu's summer palace with a beautifully gilded and painted interior and the majestic 'Gumbaz' his mausoleum, are located close to the river.

The splendidly planned ornamental gardens at the Krishnarajasagar Dam are a must see for visitors, Its fine terraced lawns and swirling fountains are illuminated over the weekend to give it a fairy tale quality.

The star shaped temple at Somnathpur is a splendid example of Hoysala architecture. It is embellished with a profusion of finely sculpted friezes and panels. The temple is well preserved and not to be missed.

This Tiger Reserve has open forests and facilities for viewing wildlife from elephant back.

A fine wildlife reserve that is within easy reach of Mysore. Its dense deciduous forests are the habitat of the tiger, leopard, gaur, elephant, sambar, chital or the spotted deer, wild boar, pangolin, langur, macaques and about 250 species of birds, including the magnificent Malabar Pied Hornbill and the Great Black Woodpecker. There are excellent facilities for visitors to stay at the Kabini River Lodge and for viewing wildlife.