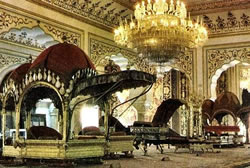 Jaipur, also known as the Pink City of India, was founded by Maharaja Jai Singh II (1693-1743) and is the capital of Rajasthan. Jaipur is surrounded by hills and dotted with forts, and is one of the links to the famed Golden Triangle of North India along with Delhi and Agra. Jaipur also serves as the most convenient entry point to Rajasthan, India's most colorful and vibrant state.

An extremely well planned city, Jaipur was designed by an engineer and scholar Vidyadhar Bhattacharya, in accordance with ancient Hindu treatise on architecture, the Shilpa Shasta (Vastu).

It was planned in a grid system with wide straight avenues, roads, streets and lanes and uniform rows of shops on either side of the main roads. Jaipur remains the only place where the nine sectors that sub-divide the city symbolize the nine divisions of the universe. Jaipur is surrounded by a wall having seven gates and was built for protection from invading armies and wild animals that lurked just outside in the jungles that surrounded the city.

The Old City, also known as the Pink City, is a wonderful place to wander around. The whole city was painted pink by Maharaja Man Singh II when Prince of Wales, later Edward VII, visited Jaipur in 1876. Today, every home within the city is obliged by law to maintain this facade. Houses with pink latticed windows line the streets, and look almost magical at sunset.

Jaipur's regal heritage is evident in its architecture and culture. Beautifully laid out gardens and parks, attractive monuments and marvellous heritage hotels, once the residence of Maharajas are testaments to the Rajasthan of yesteryears.

The arts and crafts of the state are amazing. You'll find elaborately fashioned jewellery, the multi-coloured 'bandhini' fabrics, richly decorated handlooms, and other trinkets at the colourful bazaars of Jaipur. These bazaars are a lot of fun not just what's available, but also for the cheerful people in their traditional costumes..

For the first-time visitor, it is an intriguing and unforgettable experience.

Best times to visit : October to March. The weather is pleasant, but you should go prepared for winter.

Places of Interest in Jaipur

This magnificent fort with its huge ramparts & watchtowers, is believed to have been the capital of the "Minas", the original inhabitants of Rajasthan. 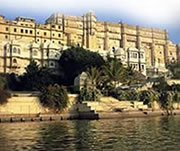 A magnificent structure, the palace occupies one seventh of the walled city of Jaipur and is a wonderful blend of Rajput and Mughal architecture. Constructions and additions to the palace continued until twentieth century. The palace houses an extensive collection of rare manuscripts, Mughal and Rajasthani miniatures, Mughal carpets, costumes and textiles, arms and weapons, objects of art and royal paraphernalia.

This fort was cleverly built to give its archers an advantage over their targets. It is said that Raja Man Singh buried huge treasures here. The fort also houses the Jai Ban - the largest cannon in Asia, rumored to have been test fired only once.

The enchanting Hawa Mahal is a multi-layered palace, with a profusion of windows and stone screens. 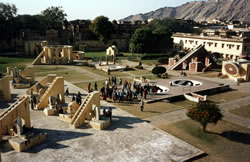 Jantar Mantar, one of the five observatories built by Maharaj Jai Singh, in 1718. He was an avid Astronomer and loved to study the movements of stars. It is the one of largest and the best preserved observatories today. A collection of complex astronomical instruments chiselled out of stone - most of which continue to provide fairly accurate information to this day - is the highlight of the observatory. Constructed with stone and marble, its complex instruments whose setting and shapes are precisely and scientifically designed represent the high points of Medieval Indian astronomy.

Nahargarh meaning abode of the tigers was built by Jai Singh to bolster the defense of Amer. Originally called Sudarshan Garh, Nahargarh offers a breathtaking view of Jaipur.

Erected in the middle of Ram Niwas Garden, Albert Hall was built in 1876 to mark the visit of Prince of Wales. It was designed by Sir Swinton Jacob and opened in 1887 as a public museum. It contains a fine collection of sculptures, paintings, decorative art objects, natural history specimens, an Egyptian mummy and a celebrated Persian Garden Carpet.

Makar Sankranti ushers in the New Year. Across India it is celebrated as a harvest festival. This is the period when the winter recedes, paving the way for summer. This is the day of kites at Jaipur. Jaipurites are famous for their expertise in kite flying. The kite flying starts well before the Makar Sankranti day, and continues after the festival. It is a treat to watch the skyline of the Pink City, studded with colourful kites.

This is the festival of women, dedicated to Goddess Gauri.

This festival, dedicated to Goddess Parvati, is celebrated only by women. Teej welcomes the monsoon rains. The women dress in bright costumes and flock to a swing hung from the branches of trees. They then lead a procession of Goddess Parvati signifying her departure from her parental home to her new home with her husband Lord Shiva. Elephants, camels and dancers form a part of the processions

(October-November) Though Diwali or the festival of light is celebrated all over India, Jaipur's Diwali is something special. The entire city is ornamented and dressed like a new bride. Every corner of the city sparkles. The skyline is filled with colourful light crackers and the Nahargarh Fort over the hill seems like a glittering palace in the sky.