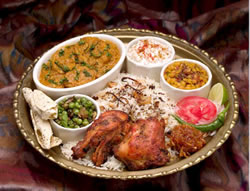 Indian cuisine is the general term for the wide variety of cooking styles from India. In reality, India hosts an even greater number of distinct regional cuisines than the entire European continent. Indian food is almost always prepared with fresh ingredients along with delicate mixtures of many different fresh and dried spices and the exact recipes often vary greatly from one household to the next.

The Vast Sub-continent of India offers a range of culinary delights as rich and diverse as its people and history. The essence of Indian Cuisine lies in the variety of desi (local) spices available and the aromas generated by their use. Diversity in climate, in cultures, social habits and the geographic locations contributes greatly to Indian gastronomy. One element unite these diverse styles-- the use of spices to create flavors and aromas distinctive of Indian cuisine. The Flavors of Indian food are appreciated all over the world.

Vegetables vary according to the different regions and the season. The vegetables are prepared according to the main dish or food that's to be served with them.  It is not common for Indians to keep leftover food, if it is bought or made in one day it is consumed that same day.  Some foods compliment each other, with the Tamil Nadu's rice and lentils being an example

The South India is famous for its spices of pungent aromas. The availability of coconut, fish and root tubers have influenced the culinary creations of the South. Rice is the staple food for the people of South India instead of wheat, which is more popular in northern states.

The very mentioning of the name of South India, particularly Tamil Nadu, brings to ones mind the tastes of Idlis, dosas, Sambhar and Vada. However, there are more than these that can treat the taste buds. Most of the vegetarian and non-vegetarian dishes of this region have a generous use of spices and coconuts. The final tempering with oil, mustard seeds, curry leaves, red chillies and urad dhal is almost the same for most of the dishes. In Kerala, the staple food of the people is fish accompanied with steaming rice of big size. Banana chips and jackfruit chips are the specialty snacks of this state and most of the visitors make sure they have at least a few bags of these items in their carry home luggage!

The Andhra cuisine has a great Mughal impact. Their food is known for its spiciness and hotness. The kebabs and the Briyanis are not to be missed. Home made pickles, pappads and dry chutney powders to be used with dosa or idli or rice are the famous culinary traditions of this region. 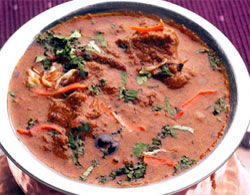 A typical North Indian meal would consist of chappatis, parantha or pooris (unleavened flat breads), pilafs, dals, curries that are mild and made in ghee, thick, creamy dals, vegetables seasoned with yogurt or pomegranate powder, lots of greens like spinach and mustard greens cooked with paneer, north Indian pickles, fresh tomato, mint, cilantro chutneys and yogurt raitas. Hot, sweet cardamom milk is very common before going to bed. North Indian desserts and sweets are made of milk, paneer, lentil flour and wheat flour combined with dried nuts and garnished with a thin sheet of pure silver. Nimbu Pani (lemon drink), Lassi (iced buttermilk) are popular drinks of the North.
Tandoori cooking is a north Indian specialty and famous the world over. Tandoori chicken, naan, tandoori roti, tandoori kebabs are a hit in most Indian restaurants.