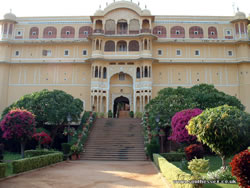 One hour drive (42 km) from Jaipur, the village of Samode is on a former caravan route and although not strictly in the Shekhavati region it is well worth the short detour. The village with its local artisans producing printed cloth and glass bangles, nestles within its old walls in the dry rugged hills of the northern Aravallis. The old havelis and their paintings are still full of character; at the head of the enclosed valley is the remarkable Samode Palace now converted into a hotel. The palace is fabulously decorated with 300 year' old fine Shekhavati style wall paintings (hunting scenes, floral motifs etc.) which still look almost new. Around the first floor of the Durbar Hall are magnificent kiosks, decorated like shish mahals. From here you look down through jail screens, as the royal ladies would have done, into the grand Durbar Hall itself with its huge chandelier suspended from four large rings in the ceiling.

On a hill immediately above the palace is Samode Fort, the Maharajah's former residence, reached in times of trouble by an underground passage. The old stone zig-zag path has been replaced by 300 steps which you climb to see the fort. Though dilapidated, there are excellent views from the ramparts; a caretaker has the keys. The main fort gate is the starting point of some enticing walks into. the Aravallis. 3 km from Samode, en-route to the main Jaipur-Agra road is Samode Bagh, a large formal garden which is being restored (often used as a film set).

The Samode Palace is one of India's most charming heritage hotels. It offers a quiet, elegant and luxurious atmosphere combined with modern comforts like air-conditioning and now even a swimming pool..