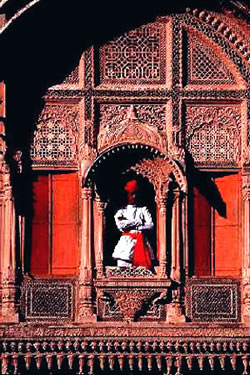 Call it by its many names and they will not do Jodhpur justice. An oasis in the arid Thar Desert, Jodhpur is the second largest city in the state of Rajasthan. Representing this colourful city with shades of blue, Jodhpur has a history that is rich and a present that beckons strongly to the discerning tourist. Forts and palaces, temples and havelis, culture and tradition, spices and fabrics, colour and texture, Jodhpur has them all and in plenty.

Situated in western Rajasthan, Jodhpur has long attracted both the domestic and outside tourist. It not only offers tangibles, in terms of what you can see and buy but also fills one with a sense of history and the splendors of an era gone forever. The hospitality of the locals, the demure women, the colourful turbans -all set against the unmerciful desert is something to feel, not just see.

Every pore of Jodhpur tells its own tales of heroic tales that made legends out of kings and soldiers, romances that continue to warm the heart and a time when epics were lived out on the streets by everyday man.

Climate : Jodhpur is given to extremities in weather. With temperatures in summer ranging from a minimum of 20°C to a maximum of 49°C, summers are not the preferred months for travel. The winters though, with temperatures hovering between maximum temperatures within mid twenties to 5-6°C at the lowest are a great time to visit.

Best times to visit : An extensive green cover ensures a pleasant season during spring and early winter. The best season to visit the city though remains between October and March.

Places of Interest in Jodhpur 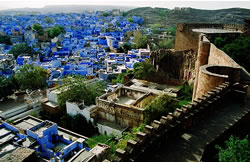 Considered one of India's best forts, this invincible stronghold of the Marwars sits on a steep hill lording over a wonderful view of its surroundings. It is also a beautiful fort and undoubtedly, the jewel of Jodhpur. Intricate latticed windows, elaborately carved panels and elegantly curved porches speak of beauty and taste. No matter what part of the fort you are in, its ambience will leave you in awe and your senses reeling. Take in the sight high up on the rampart where the second largest cannon in Asia rests, the recoil of which requires an area as large as a football field! 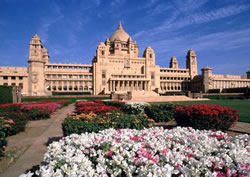 If forts can be ornate, this is a palace we are talking about. The Umaid Bhawan Palace was built in the 20th century as a famine relief project, providing employment to its people over a time period of 16 long years. And if the Mehrangarh fort is the jewel, the Umaid Bhawan comes a very close second. A fabulous art-deco edifice, Umaid Bhawan is fabulously maintained and contains within, the museum - a veritable treasure-trove of memorabilia showcasing the royal past of Jodhpur. Peek into a little of everything that royalty lived with - from tea sets and clocks to paintings and royal apparel. The palace now operates as a heritage hotel, though part of it is retained as the royal residence.

Close to the fort complex, this 19th century cenotaph was built in white marble, in commemoration of Maharaja Jaswant Singh II. Rare portraits of Jodhpur's past rulers are also displayed here. Walk around and savour the intricate work both on the lattices and the doors. The gardens and water tank built in front of the cenotaph provide this place the perfect setting for serenity.

While the shopping centres of Jodhpur may not technically fall under the category of 'what to see' in Jodhpur, the list would be quite incomplete without it. Renowned for its tie and dye textiles, jootis, lacquerware, antiques, carpets and puppets, make a trip to the Sadar Bazaar, where you will find all of the above and more. Jodhpur has many a unique thing to decorate your home and life with. Visit Mohanlal Verhomal's store for Indian spices, the Umaid Bhawan/ Ajit Bhawan Road to shop for Antiques and don't miss the Jodhpur Handloom House for beautiful Bandhni and Leheriya saris.

For those of you that cannot get through a holiday without sport, the Sadar Club at Ratanada offers a round of golf - Rs 100 for 18 holes plus Rs 50 for equipment and Rs 20 for a caddie. The club was built by the British about a 100 years ago and the ambience is wonderful especially if you like a round of golf.

Travel just 8 kms from the city to visit Mandore, once the capital of Marwar. There are old cenotaphs of the Rathore rulers and craggy caves that once sheltered homeless ascetics here. While the sixteen deities carved out of the rock face are rather garishly displayed in a niche adjacent to a temple within the complex, the exquisitely landscaped gardens are home to a variety of birds and small animals.

Jodhpur has some festivals that are special if not unique to it, the kite festival of Jodhpur being one of them. What makes the kite festival unique is the simple fact that it began just a few years ago, which means no stories, myths and legends that most other Indian festivals carry.

This desert kite festival is becoming increasingly popular among kite fliers the world over. It is celebrated on the 14th of January, celebrated in other parts as Makar Sankranti or the day of transition of the sun into the Northern Hemisphere.

This day is inextricably related to kites in most parts of India. People from all ages can be seen with kite and string with necks straining towards the sky. It turns into a competition where the aim is to ensure that other kites are downed while yours soars higher. Everyone is an adversary and every kite is fair game.

The three-day festival is inaugurated at the Polo Ground, the venue for some serious kite flying and fighting. There is the display part of the festival, where Air Force helicopters release kites from the sky and hundreds of schoolchildren release balloons. Kites take on a life of their own and the designs on each of them makes the sky take on hues that have never stained the skies before.

Then there is the Fighter Kite Competition, where crowds roar in encouragement and there is poetry in motion. Both the Display and Fighter Kite categories have prestigious trophies that people covet and strive to win. The evenings see participants being provided with dinner at exotic locations.

On the final day, the festival shifts to the exquisite lawns of Umaid Bhawan Palace, the royal residence of the Maharaja of Jodhpur. The finals of the Fighter Kite Competition and the final judging of the Display Kites are followed by the prize distribution ceremony, the valedictory function, and a farewell dinner with the Maharaja.

The vibrant and fun filled Marwar festival is held annually and is a celebration that brings to life the essence of all that Rajasthan stands for. Jodhpur celebrates this two-day festival with folk music and dance, fun and folklore.

The Marwar Festival is held every year in memory of the heroes of Rajasthan. The festival is held in the months of September-October and is a joy to behold. Originally known as the Maand Festival, it features folk music that centres on the romantic life-style of Rajasthan's erstwhile rulers. This festival is devoted to the music and dance of the Marwar region and offers a good opportunity to see the folk dancers and singers who assemble here, providing hours of lively entertainment. These folk artists provide a glimpse of the days gone by, of battles and valiant heroes who still live on in their songs.

The attractions of the festival are compounded by the venues they are held in. the Umaid Bhawan Palace, Mandore and the Mehrangarh Fort are hosts to this cultural feast.