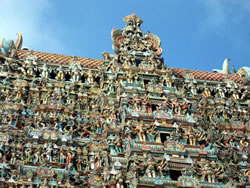 Known as the "city of nectar", Madurai is the oldest city in Tamil Nadu and was home to the ancient Tamil Sangam, the literary conclave that produced the first epic, Silappathikaram. Today, it is known to produce some of the finest textiles in India and some of the best harvests of jasmine flowers. One cannot ignore mention of the Meenakshi Temple, which is as well known for its architectural splendor as also a shelter, which inspired a thousand arts.

Madurai has found mention in Megasthenes' Indica, where the ancient Greek diplomat and envoy to India in the 3rd century BC wrote about this temple-city in the most glowing terms. Madurai reached its pinnacles of glory during the time of the Cholas and then during the Pandyas' regime in the 13th century.

Climate : Chennai has a very hot tropical climate. The temperature variation between winters and summers is minimal. Rainfall is timely and tends to be heavy during the monsoons. Proximity to the sea makes the atmosphere heavy and humid. The summers are sultry and hot while winters are warm. As such Chennai has enough to offer a year round tourist season and one can visit the place any time.

Best times to visit : Between November and February

Places of Interest in Madurai 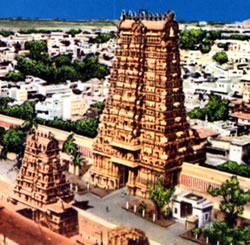 Your trip to this city would not just be incomplete but pointless without visiting the Meenakshi Sundareswar temple. Dedicated to Meenakshi, the lovely consort of Shiva or Sundareswar, as he is known here, the Pandya king Kulasekhara originally built the temple in the 13th century though it attained its present splendor only in the hands of the Nayaks, 400 years later.

Legend has it that Meenakshi, the beautiful princess born to the Pandya king of Madurai had three breasts. This deformity is said to have vanished when she met her divine consort, Shiva. The temple holds in thrall visitors from all over the country and world.

The temple complex with 12 towers, the Thousand Pillared Mandapam and the Potramaraikulam (the golden lotus tank) is a perfect example of Dravidian architecture. The temple tank also played host to the ancient Tamil Sangam who met here to decide on the merits of literary compositions.

The Thousand-Pillared Mandapam, which actually has 985 pillars, make musical sounds when struck and houses the Temple Museum. The gopurams are covered with extensive carvings depicting stories from Hindu mythology, and the one on the east serves as the principal gateway to the shrine.

Muslim armies on the rampage brought an end to the royal line of the Vijayanagar Empire paving way for the Nayaks, who assumed royal powers over their principalities, which included Madurai. The city and the dynasty flourished from the 16th to the 18th century. Thirumalai Nayak built this palace 1 km Southeast of the temple. Built in the Indo-Saracenic style, all that remains of this magnificent mansion today are the principal entrance, the dancing hall and the main hall. The main attraction now is the light and sound show in the palace, which depicts events from Thirumalai Nayak's life and also snatches from the ancient Tamil epic Silappathikaram. 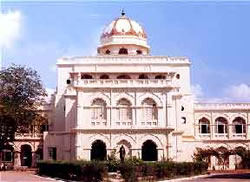 Also built by Thirumalai Nayak in the 17th century, this huge tank in the eastern part of the city is said to have underground channels connecting it with the Vaigai River. There is a Mandapam with an idol of Vinayaka or the Elephant God, right in the middle of the tank, brilliantly illuminated during the Float Festival celebrated on the full moon day of the Tamil month of Thai, falling between 15th January and 15th February.

This cave temple is cut out of solid rock. There are myths and legends surrounding the deity Murugan here. This is one of his six abodes, Murugan being the second son of Shiva. Situated 10 km south of the city, the place where the temple is built is supposed to have been the site of his marriage to Devayani.

This museum as the name suggests is dedicated to Mahatma Gandhi, fondly known as the Father of the Nation. It is housed in what used to be the palace of Rani Mangammal. Among the collection of Gandhi memorabilia exhibited here is the bloodstained dhoti that he was wearing on the fateful day of his assassination.

This festival is celebrated between the months of April and May (Chithirai - according to the Tamil Calendar), when the celestial marriage of Meenakshi to Sundareswarer is celebrated , Azhagar travels to Madurai. A gold processional icon called The Sundararajar is carried by devotees in procession from Azhagar Koil to Madurai for wedding ritual.

Held in January - February, the float festival takes place in the Vandiyur Mariamman Teppakulam. The night comes alive as the specially constructed raft carried the deities around the lake. Brightly lit with flowers on all sides, not to mention the throng of people that gather to watch the fetivalm there is a sense of peace that this ritual seems to inspire. decorated with flowers and lights carries the deities around the tank.