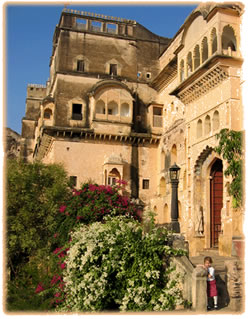 Located almost midway between Delhi and Jaipur, Neemrana dates back to 1464 A.D., when it was built as a fortified palace. It was inhabited almost continuously until independence in 1947, when royal privileges were first curtailed and then abolished. Maharaja Rajendra Singh then moved out, the people of the Neemrana village moved in, and the palace was slowly ransacked over the next 30 years. Finally Aman Nath and Francis Wacziarg rediscovered it in the late 1970's and took on the task of maintaining it and turning it into an exclusive heritage hotel.

Neemrana fort palace is one of the oldest and finest amongst India's Heritage Hotels. Each room is decorated in individual style with period furniture, private open terraces and courtyards. One of the nicest aspects of Neemrana is its dining. The cuisine is Rajasthani Indian and Continental, mainly French and every meal is different. The hotel now also offers a swimming pool and Ayurvedic massage centre.