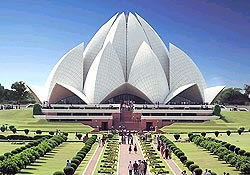 Living testament to the glory of the Mughal days, patron of palaces and tombs and the capital of India, New Delhi is all of this and more. Situated about 160 kms south of the Himalayas and on the west bank of the Yamuna River, a tributary of the Ganges, Delhi has the distinction of being the historic hub of politics.

Delhi is as modern or ancient as you want it to be. Today's Delhi is cosmopolitan, modern and fun-loving. With feasts for art and theatre lovers, concerts for the musically inclined and food that can make a gourmet cry with delight. Delhi is a place with something for everyone.

People from all parts of the country inhabit Delhi. There are different cultural pockets with Punjabi's being the most dominant section here. The most common languages spoken here besides English are Hindi, Punjabi and Urdu.

Climate : Delhi has a climate of extremes. The summer lasts from mid-March to the end of June, with average maximum and minimum temperatures of 36º C and 25º C respectively. The monsoons follow the hot summer, continuing till the end of September with an average rainfall of about 26 inches. The winter extends from late November to mid-February. The coldest month is January, when both the maximum and minimum temperatures are at their lowest - 21º C and 7º C respectively.

Places of Interest in Delhi 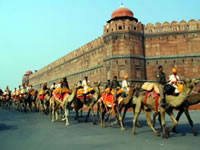 Also called the Lal Qila, the Red Fort is laid out along the river Yamuna as an irregular octagon. It is surrounded by a wall of about 2.4 kms in circumference and is built of red sandstone. The Mughal ruler Shah Jahan transferred his capital from Agra to Delhi and after nine years, the fort was completed in 1648. The fort has two main entrances, the Delhi Gate and the Lahori Gate.

Formerly the Vice-Regal Palace, it is the official residence of the President of India. This 340 rooms palace and its gardens cover an area of 330 acres. Special permission has to be obtained in advance to visit the Rashtrapathi Bhavan. 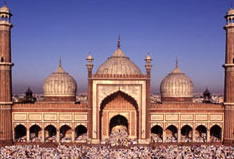 Jama Masjid, one of the largest mosques in India was built by Shah Jahan. The Masjid overlooks the old markets of the city that are massed around Chandni Chowk and stretches till the great Red Fort. Walking through this area can prove to be a trip down the times, where the flavor of old Mughal charm still lingers.

The emblem of Delhi, the 72.55 meter high Qutub Minar was erected in the 13th century by Qutub-Ud-Din Aibak. Within the complex is an Iron pillar, which has never rusted. This five-storied tower is visible from a distance of several kilometers. Which means that you could be visiting a lot of places in Delhi and the Qutub Minar stays with you.

Rajpath is worth a visit. Every January 26, the grand Republic Day Parade is held there. At one end, is the India Gate where the eternal flame burns to commemorate India's war heroes. At the other end is the Presidential Palace, the Rashtrapati Bhavan. On some days in early spring, visitors are allowed to wander around the building's famed Mughal Gardens.

The hall of Public audiences is where the Emperor listened to the grievances of his subjects, settled disputes and generally dispensed justice.

The hall of Private audiences, a structure of white marble, is where the Emperor held private meetings and met dignitaries. The famous peacock throne, studded with precious stones, was in this hall before Nadir Shah carted it away to Iran.

Jantar Mantar is an observatory. About 300 years old, it can measure the movement of the earth and the stars. It is also a very peaceful park in the centre of town.

These beautiful gardens have majestic domed tombs of many Sayyid and Lodi Sultans. The well-kept gardens with fountains, ponds, flowering trees, blossoming shrubs and bushes are ideal places for joggers and those who seek solitude.

This massive 42m tall structure was built as a memorial to the 90,000 Indian soldiers who lost their lives in World War I. The structure has the names of the soldiers engraved on it. An eternal flame burns here in commemoration of the brave soldiers.

Haji Begum, the senior wife of Emperor Humayun built this mausoleum in the mid 16th century. The tomb is situated amidst avenues of trees, watercourses and flowerbeds. A magnificent example of refined early Mughal architecture, the structure harmoniously blends with nature.

This is the sixth city of Delhi. Located south-east of India Gate, it is one of the most prominent monuments in Delhi. Humayun started the fort's construction but Sher Shah, who drove him out from Delhi, completed the city during his own reign (1538-1545). The massive walls and huge gates were constructed by Humayun. The octagonal Shermandal and the Quila-i-Kuhran Masjid were built by Sher Shah.

Connaught Place is an upmarket shopping area designed by Edwin Lutyens who also designed the whole of New Delhi.

One of the most colourful events in New Delhi is Republic Day, celebrated on the 26th of January. This day epitomizes the idea of pomp and splendor, with parades and dances, speeches and floats from all over India. The Beating Retreat, which marks the end of celebrations on 29th January is a moving ceremony with military bands playing at Vijay Chowk. The national anthem seldom leaves a dry eye in the audience. The whole nation watches the televised celebrations. While most other festivals are celebrated, Diwali, the festival of lights and Baisakhi, a festival heralding the North Indian new year are the ones with the Delhi flavor.