India - A land of intense spirituality and religious faith reflected in the profusion of temples present in this subcontinent. Temples are found every where in India from large monumental structures to small stonebuildings, eachhaving a certain significance and greatly influencing the lives of the people who regard the temple as a place where they could be close to god.

Hinduism is the religion followed by the Hindus. The Hindu philosophy has a very strong influence on the people governing various aspects of their lives including their spiritual life. The Hindu temples apart from being religious also play the role of a social, cultural and economic center influencing the lives of the people both in the cities and villages. These wonderful monuments form a part of the Indian cultural heritage. 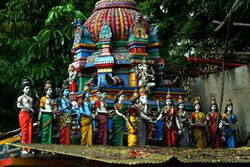 This is the style that developed in the Dravida Desam. The Vimana and the Gopurams are the distinctive characteristics of the Southern style. The Vimana is a tall pyramidal tower consisting of several progressively smaller storeys. This stands on a square base. The Gopuram has two storeys seperated by a horizontal moulding. The Prakara or the outer wall, envelops the main shrine as well as the other smaller shrines, the tank.The Pallavas, the Cholas, the Pandyas, the Vijayanagar rulers, the Nayaks all contributed to the Southern style of temples. 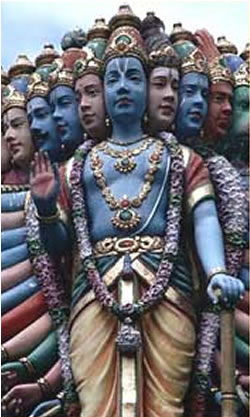 The temples in North India which can be described as the typical Nagara style. These temples escaped the destruction due to invasion. The temples as well as the literature laying down the rules and mode of construction have been well preserved in Orissa. In this style, the structure consists 0f two buildings, the main shrine taller and an adjoining shorter mandapa. The main difference between the two is the shape of the Sikhara. In the main shrine, a bell shaped structure adds to the height. As is usual in all Hindu temples, there is the kalasa at the top and the ayudha or emblem of the presiding deity.

The basic structure of temples in India is a room or Garbhagriha (sanctum sanatorium) where the idol of the main deity is kept. The temple is approached by a flight of steps and is often built on a platform. A porch covers the entrance to the temples, which is supported by carved pillars. A prominent roof called the shikhara surmounts the top of the Garbhagriha, and dominates the surroundings. As time went, by small temples grew into temple complexes. Some temples have a hall or mandap from where one can reach the sanctum sanctorum.

Temple architecture in India is broadly divided into northern and southern styles, classified by the form and shape of the shikhara and the distinctiveness of its decoration. The shikhara of the temples in South India tend to be made up of distinct horizontal levels that diminish to form a rough pyramid. Each level is decorated with miniature temple rooftops. The shikhara of the temples in North and Central India, in contrast, resembles an upturned cone that is decorated with miniature conical shikharas. Some temples developed their own local flavor apart from adhering to their basic native style.