Ramayan is the oldest and the most popular epic of the Hindus. It consists of seven books with 24,000 couplets, composed and written by Sage Valmiki. It is said to represent the expansion of the Aryan culture over the Deccan and South India. Orthodox Hindus believe that the Ramayan belongs to the Treta Yuga.

While the modern historians believe that it belongs to the period same as that of the Sutras i.e. after the Vedic period. The theme of Ramayan as popularly known is the conflict between Ram and Ravan. They are taken to be the representatives of the Aryans and the non-Aryans. 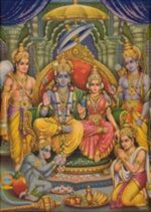 Obviously the conflict ends with the victory of the Aryans over the non-Aryans. Another view is that Ram stands for Indra - the God of rain who fought against Vritra. In the Indian context Ramayan and Mahabharat set norms of epic. Interestingly, these two epics have provided canvas or theme for many forms of art, like paintings, sculpture, poems, plays and stories.

It consists of seven 'Kandas' or volumes and about twenty four thousand verses or Shlokas. It is claimed that the original Ramayan consisted of the second to the sixth volume and later on interpolated and expanded to the state of today's Ramayan. The poet Valmiki was formerly a robber who was converted to devotion of God by Sage Narad, the messenger of God. Having undergone devotional worship for many years, he acquired the stature of a seer.

Once he saw a hunter killing a mating pair of cranes. He was moved by the sufferings of the birds and passed a couplet verse as a curse to the hunter. This was supposedly his beginning of writing poem. He further composed verses in praise of a king Ram later taken to the level of God in Hindu mind. It is the story of Ram, who is expected to be coronated in the near future, but suddenly one of his stepmother remembers to have a privileged right to ask for anything from her husband.

She asks for the throne in favor of her true son, and Ram the eldest son to be expatriated. Ram, along with his wife and brother, leaves for forest to spend fourteen years. In the forest, Ravan, a king of demons, abducts Sita, the wife of Ram. Ram with the help of monkeys such as Hanuman, bears and other animals and tribals fought victoriously against Ravan, killing many of Ravan's army, and came back to Ayodhya, the capital of his kingdom. Apart from this brief storyline, there are many facets to the epic.

As it has given impetus to works such as Raghuvansh, folk forms of stories and myths enrich the epic in itself. Outwardly it's a story of abdication and a war for right principal and re-induction to the throne. Ramayan is idealistic in the handling of human characters. It has personified idealized human values and ethical and moral values in the form of Ram.

He is an ideal son, brother and king in the Indian mind. Sita is an ideal wife personified. Ram, his wife Sita and his brother Laxman are worshipped as Gods. Not only that, his devotee Hanuman is also a deity by himself. Sufferings of Sita as a woman are always symbolized as sufferings of common woman. In fact in Indian view, even though these were Gods, still they had to suffer due to the stroke of destiny. Needless to say, for mortals like us sufferings are inevitable.