The two great epic works of the Hindus are Ramayan and Mahabharat. In modern terms the Mahabharat may be said to be realistic and the Ramayan idealistic, in their respective handling of human characters. 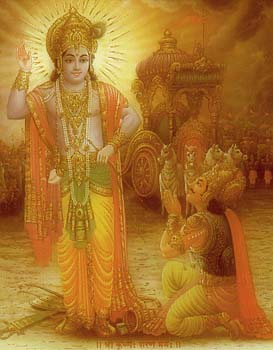 Sita in Ramayan is all that a woman could or should be. And is impressive by her sweetness and devotion. Draupadi in Mahabharat, on the other hand maybe any of the high spirited modern women with her anger and brooding for revenge and for that reason more human.

There is greater realistic truth in the full blooded characters of Mahabharat, higher passion, nobler resolve, fierce jealousy and more biting scorn and greater grandeur in many of it's scenes. Yet it is greater spiritual beauty, greater softness and tenderness of emotions in Ramayan. The subject of Mahabharat is men and war, while the subject of Ramayan is women and home.

These epics are regarded as the Vedas of the masses. People in sorrow, in joy and in daily toil turn to these epics for solace and inspiration. In Indian context norms of Epic are set by Ramayan and Mahabharat.

Many more topics were treated in great length by number of line verses or chapters but none equals these two. Interestingly, these two epics have provided canvas or theme for many forms of art, like paintings, sculpture, poems, plays and stories. This epic is written by Krishnadvaipayan Vyas. It was claimed that whatever that can exist in human life is all dealt with by Vyas in Mahabharat and conversely. Whatever that does not exist in Mahabharat can not exist in the world.

It is a story of a dynasty of Kuru that is Kaurav. Later on lineage assigned to Pandu that is dynasty of Pandava.And finally war between the two related families,which involved many small kingdoms throughout the nation.The final version of the epic was formed in the fourth century A.D.There are many Parvas having lacks of Shlokas. The most authentic version of Mahabharat was prepared in 20th century by many researchers under the guidance of Mr. Vaidya in Bhandarkar Oriental Research Institute.

The story of Mahabharat has many substories, many plots and subplots hence by spread it is very wide. The epic has also inspired many artists like that by Ramayan. Many plays such as Abhidnyan Shakuntala, by Kallidasa, plays by Bhasa such as Venisamhara, Urubhanga etc. are based on the themes or plots from Mahabharat.The story is believed to have taken place around 1500 years BC.
Interestingly it was mentioned as history while the Ramayan was mentioned as a part of Purana. It was originally written as 'Jay'. It was later on revised as 'Bharata' and it was further expanded as 'Mahabharat'. It consists of story of Dushyant a king and Shakuntala a daughter of heavenly dancer Menaka. Her son was named as Bharat. He later on ascended the throne of Dushyant.

The name of the nation designated by foreigners as India bears his name to the subcontinent as Bharat. Hence the name of the nation is Bharat alias India. If Ramayan is symbolised as ideality and for setting up the norms and standards of ideality, Mahabharat can be considered as depiction of reality.

Ramayan has taught what it should be, whereas Mahabharat has bravely depicted what it generally is. It is story of lust, and renunciation, pious as well as crooks. It speaks of fearless warriors and cowardly behavior of some of them. Of obedience as well as rebels.

Though it is mainly a story of dynasties a character coming as a shepherd brought up as foster son of a chief in a village Mathura is raised to the height of God in the Indian minds. He is the one who is responsible for the final war between the two kingdoms to assert for righteous claim and only he is credited with the out come of the war, the victory of Pandavs.

Mahabharat as a pool of information mirrors society at that time, customs rites and rituals, value system and ethics of the time. It also speaks of political variation in the form of local democratic government to rural form of governance to kings and kingdom. It also reflects racial as well as cultural struggles amongst the different people of India. It has forged the Indian identity as unity in variety of races, languages, religious beliefs etc.