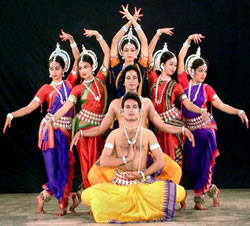 Odissi originated from Orissa. The sculptures in the temples of Brahmeswara, Sun Temple at Konark, as a form of worship and meditation It was first encountered outside the temple in the early part of the sixteenth century. In 1950s with Abhinaya Chandrika's perseverance, the dance form could be revived back to its original glory and fame

A class of tender aged dancers known as Gotipuas began performing Odissi for the masses to convey the spiritual stories, while the Maharis (temple dancers) continued the tradition within the temples. Odissi is an expressive and sophisticated art form, which features poetic nuance and fanciful storytelling.

Highly stylized in nature, it utilizes powerful, energetic footwork (tandava), juxtaposed with sinuous, graceful feminine postures and movements (Lasya). Handed down from teacher to disciple for thousands of years, Odissi emphasizes, and in fact, centers around spirituality and devotion.