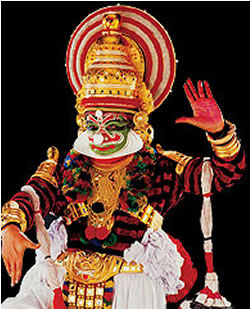 Kutiyattam Sanskrit plays performed in kerala temples, recognized by UNISCO for preservation as the oldest form of surviving dance drama in its original and traditional form, provided the basic roots of Kathakali. Even though many changes have taken place since it was developed in the sixteenth century, the make-up and costumes still resemble those of Kutiyattam. As in the case of Kutiyattam, a large oil lamp is placed at the center of the front-stage, which is the main source of light for the performance, a curtain was held by two attendants while the actors enter the stage, and the play begins when the curtain is removed. Originally, the actors themselves sang the music called “padams” as the Kutiyattam performers do, but since early seventeenth century, a singer sang all music (called slokas and padams) and the performer concentrates on choreographic movement. A second singer was later added, and the two singers also play brass plate instruments called “ilattalam” and “cennalam”. Drums called Maddalam and chenda are the other instruments used, instead of Mizhavu in the case of Kutiyattam.

Dramatic expression is conveyed through gestures called “mudras”, facial expressions and mimetic dance. Colourful mask designs painted and moulded on the face of the actor intensifies the movement of eyes, eyebrows and facial muscles. The splendour of jeweled headdress, masks and colourful costumes create the symbolic personage of the Kathakali theatre. “Chutti”, the raised white ridge made of paper on base of paste of ground rise running along the chin and side of the face is common to all characters, except women, sages and messenger. Women and sages appear in delicate golden yellow facial make-up called “minuku” with finely penciled eyebrows and dramatically made up eyes. Divine beings, kings and heroes are depicted by green facial make-up (called “pacha”), while arrogant and wicked characters have a knife-like red pattern in a green facial background (called “kathi”). The red beard represents malignant and demonic characters. Pure souls like Hanuman appear with white beard and aboriginal or forest dweller has black beard.