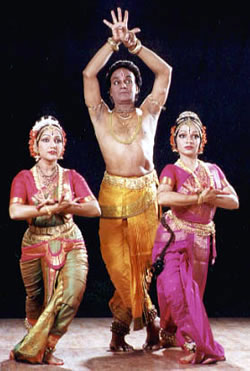 Kuchipudi is an Indian classical dance that has its roots in a humble little village of the same name, situated in the Krishna district of Andhra Pradesh, India. For centuries, the village of Kuchipudi had a rich cultural halo around it. The whole neighbourhood of the village was filled with a flavour and spirit of art. Patron Kings, talented composers, prosperous ports - everything contributed to the growth of the dance form.

Kuchipudi is unique among the Indian classical dance styles. It uses fast rhythmic footwork and sculpturesque body movements. Stylised mime, using hand gestures and subtle facial expression, is combined with more realistic acting, occasionally including dialogues spoken by the dancers. Traditionally, Kuchipudi was performed as a dance drama based on scriptures and mythology, and the portrayal of certain characters is a central motif of this dance form. Another unique feature of Kuchipudi is the Tarangam, in which the performer dances on the edges of a brass plate, deftly executing complicated rhythmic patterns, while sometimes also balancing a pot of water on the head. Kuchipudi is accompanied by Carnatic music. A typical orchestra for a Kuchipudi recital includes the mridangam, flute and violin. A vocalist sings the lyrics, and the nattuvanar conducts the orchestra and recites the rhythmic patterns.

Kuchipudi is a combination of Nritya, Netya and Natya i.e. it fuses dance, gestures, speech and song. Therefore, a Kuchipudi dancer has to to be well versed in dancing, acting, music, various languages and texts. The dancers adorn themselves with the traditional temple jewellery which includes head, ear, neck, hands, fingers, waist ornaments. They wear a stitched costume that has five pieces including the angrakha, blouse and pyjama