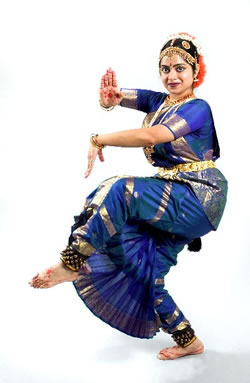 Bharata Natyam is a classical East Indian dance form that has its roots in the dance that used to be performed by the temple dancers of southern India.

Bharatanatyam is an ancient classical dance style, originally performed in the Hindu temples of Tamil Nadu, in southern India. The Indian dance system is the oldest and most comprehensive in the world, having an unbroken tradition that goes back 2000 years.

In India, dance has been used both as a vehicle of worship and as an expression of profound emotions, a human being's most subtle states of mind. The origins of Indian dance are shrouded in the mist of antiquity. The bronze figurine of a dancing girl discovered in the 4000-year-old ruin of Mohenjodaro is the world's earliest evidence of dance.

In early medieval times the tradition of temple dancers called devadasis started to be widespread. These dancers were women that were dedicated to a temple. They were not married but were ritually married to the God in the temple.

The name 'Bharatanatyam' is derived from three basic concepts of Bhava, Raga and Thaala.

The general interpretation for the name is :

Recognized for its dynamic rhythm and rich vocabulary of expressive gestures, its hallmarks are crisp geometrical movements, sculpturesque poses and stylized expressions. Bharata Natyam is characterized by its demi-plié-like stance, complexity of rhythmic footwork and delicate facial expression. Visually, it is a dynamic, earthly and precise style of dance with a distinct linear quality.

Ideally this should be the first public performance of an artist. After learning bharatanatyam under the guidance of an accomplished guru, this is the occation for the proud guru to present his/her deciple to the public. This is the testing time for both the guru & the shishya(deciple) as the guru's knowledge & the deciple's talent both are judged by the public. Hence, the guru will decide when the deciple is ready for public appearence. Atleast 10 - 12 years of training is necessary to give a comendable performance.

The sequence of the dance performance is 'Alarippu', 'Jathiswaram', 'Sabdam',  'Varnam', 'Padam' and 'Thillana'. After 'Thillana', with a 'Mangala Slokam' the dance program ends. Normally the performance lasts for two to two and half hours.

The costume is paijama and jacket of Kanchipuram silk and Banaras silk. The dancer wears a lot of ornaments of shining stones on neck, ears, hands, and head, jasmin garland in the hair and foot trinklet with small bells.

Bharata Natyam is integrated with the Carnatic ~ South Indian ~ system of classical music. The instruments used are Veena, Flute, Mridangam and Violin. The dance direction is done by 'Nattuvanar' giving the 'Beat' using hand symbols and singing 'Vaaythari'. There will be two singers also.

In this dance form there is one part that is purely technical, where the feet are used to stamp different intricate rhythms while the hands and eyes do ornamental movements. The other part of the dance is where the hands and facial expression together with the body movement are used to portray stories from the Hindu mythology