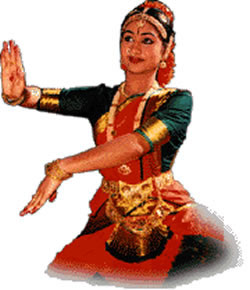 The Devadasi dance tradition which developed through the temple danseuses is an important form among the dance patterns of India. Mohiniyattam in Kerala took shape in the tradition of Devadasi dance which later grew and developed a classical status.

The special style of dancing developed by the Devadasis in Kerala was originally called 'Teviticci Attam'. Devadasis in Kerala were known by the general name 'Teviticci' which literally means   -  woman who serves at the feet of God Their dance was called 'Teviticci - Attam' . This later came to be known as Mohiniyattam by about 16th century AD. The word 'Mohini' literally means a maiden who excites desire or steals the heart of the on looker. It is a solo female dance in which the striking features is the musical melody and rhythmical swaying of the dancer from side to side and the smooth and unbroken flow of the body  movement. The dance is focused essentially on feminine moods and emotions.

There is the well known Puranic story of Lord Vishnu taking on the guise of a 'Mohini' to enthrall people both in connection with the churning of the milk-ocean and with the episode of the slaying of Bhasmasura. In the Bhasmasura story, 'Mohini' towards the end of her dance, persuaded the Asura to place his own finger on his head unwittingly to his own undoing. This episode seems to be picturesquely  represented in the first item of the Mohiniyatam  called 'Colkkettu' which begins with a pose of the dancer showing with her right hand, the murder of 'Suchimukha' with her first finger pointing to her own head. So Vaishnava devotees could have given the name of Mohiniyattam to this art form.

This portal is designed to support Students and Teachers of Central Board of Secondary Education. CBSE Guess having millions of pages of educational papers provided by various educational institutions, teachers and educators from India and abroad. In CBSEGuess you can download CBSE Board Papers from the archies of 50K CBSE Sample Papers, Guess Papers and Question Bank. We Database of more then 20K CBSE Tutors, Millions of CBSE Students, Teachers and Principals. Having Listing of CBSE and Non CBSE Schools with Alumni associated with schools. We also compile CBSE Academics curriculum / syllabus, CBSE Results, CBSE News, CBSE Videos for you. You can buy discounted CBSE Books by publishers like oswaal books and download free CBSE eBooks or read online. Recently We started Publishing CBSE Proficiency Test papers and Problem Solving Assessment (PSA) for Maths, Science, Socal Studies, Hindi, English, French and regional langages. We also compile various competative examination materials AIPMT, AIEEE, CA CPT, CTET, NDA, NEET, SCRA, IIT JEE.
DISCLAMER: The information displayed is indicative but compiled with care and diligance. However, CBSEGuess and Dreamzsop does not take the responsibility of how it is used or the the consequence of its use. Database updation is subject to availability. CBSEGuess or Dreamzsop is not associated or affiliated with Central Board of Secondary Education.
COPYRIGHT © 2003 - 2021 CBSEGuess.com Terms of Usage / Privacy Policy
POWERED BY DREAMZSOP