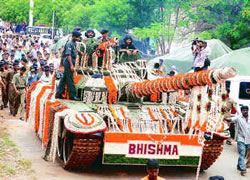 The Indian Army is one of the largest in the world, with a history going back several hundred years. It was during the British era, that a Military Department very similar to the present Ministry of Defence was set up but, with most of the senior positions occupied by the British. It was after Independence, on 14th January 1949, the Army had its first Indian Commander-in-Chief, General (later Field Marshal) KM Cariappa. The army headquarters is located in Sena Bhavan and portions of the south block of the Red fort in Delhi.

Armed Forces offer excellent career opportunities to the adventurous young candidates. It is a career that offers immense facilities, a privileged lifestyle and of course, honour in serving the country. The Armed Forces characterize the ideals of service, sacrifice, patriotism and our country's composite culture. The basic responsibility of the Army is to safeguard the territorial integrity of the nation against external aggression. In addition, the Army is often required to assist the civil administration during internal security disturbances and in the maintenance of law and order, in organising relief operations during natural calamities like floods, earthquakes and cyclones and in the maintenance of essential services.

The two main lines of work in the armed forces are categorised under the Fighting Forces and the Support Services. The fighting forces comprise the armoured corps, artillery, signals, engineering and the infantry (and similar divisions in the navy and air force), while the Support Services include electronics and mechanical engineering, ordinance corps, medical corps, intelligence and education.

The Indian Army functions under the Chief of Army Staff (COAS), formerly designated as Commander-in-Chief. COAS is assisted by Vice - Chief of the army staff and seven other Principal Staff Officers (PSO's), namely, the two Deputy Chiefs of the Army Staff, Adjutant General, Quarter Master General, Master General of Ordnance, Military Secretary and Engineer- in- Chief.

The Army is divided into six operational commands (Field armies) and one training command, each command under a General Officer Commanding in chief who has an equal status to the Vice-Chief of Army Staff (VCOAS), and working under the control of Army HQ in New Delhi. The major field formations are Corps, Division and Brigade which are commanded by a Lieutenant General, Major General and Brigadier respectively.

The Indian Army is organised into five regional commands

In addition, there is a Army Training Command at Shimla for the purpose of laying down the training policies for the Army.

The Indian Armed Forces employ more than a million young men and women each year. One can join the Army as an officer or an Army Man. The recruitment to the Armed Forces is voluntary and every citizen of India, irrespective of his caste, class, religion and community is eligible for recruitment, provided he meets the laid down physical, medical and educational criteria. Recruitment into the Army is carried out according to Recruitable Male Population (RMP) of each state