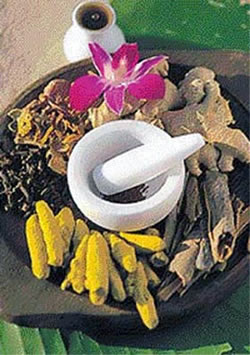 Ayurveda, the perfect science or knowledge of life is believed to be the oldest treatment method which evolved around 600 BC in India. The word Ayurveda originated from the two Sanskrit words, 'Ayur' meaning life and 'Veda' meaning knowledge. Ayurveda practiced by special physicians called 'Vaidyas' is known to promote positive health, natural beauty and long life.

Life, according to Ayurveda, is a combination of senses, mind, body and soul. The medicinal system believes that human beings and nature should be in perfect harmony and that disease occurs when the equilibrium between these two is disrupted. Restoration of this fundamental balance, through the use of nature and its products is the main goal of this medical system. The concept is not just on curing bodily ailments but also on preventing. Ayurveda emphasizes that 'Prevention is better than cure'.

In Ayurveda, which is basically a humoural medical system, diseases are understood as an imbalance between the body's three humors, Vata (nerve energy), Pitta (catabolic fire energy) and Kapha (anabolic nutritive energy). Natural herbs and minerals are used for preparing medicines. Apart from herbs, purification and detoxification, dietary changes, body massages and meditation are used to promote health and prevent and treat illness. Ayurvedic medicines are rapidly gaining acceptance all over the world as they have no side effects and is found to have cures for even rare ailments. Check out the link Ayurveda to know more about the system.

Central Council for Research in Indian medicine and Homoeopathy (CCRIMH ) was established in 1969 by the Government of India for a systematic research in Ayurveda . In the year 1978, CCRIMH was split into four separate councils, one each for Ayurveda & Siddha, Unani, Yoga & Naturopathy and Homoeopathy. The Central Council for Research in Ayurveda & Siddha (CCRAS), an autonomous organization formed under the Ministry of Health & Family Welfare, is engaged in research in various fundamental & applied aspects of Ayurveda.

Ayurvedic Education in India is presently monitored by the Central Council of Indian Medicine (CCIM), (www.ccimindia.org) a Statutory Central Government body. At present there are about 154 recognized Under-graduate and 33 Post-graduate Ayurvedic Colleges in India. The five and half year under-graduate programs in Ayurveda lead to a Bachelor of Ayurvedic Medicine & Surgery (B.A.M.S.). Post-graduate programs is structured into16 branches leading to a Doctorate in Ayurveda.

Nowadays Ayurveda has become very popular among the tourists especially foreigners. It is a part of a new movement towards a global medicine that includes the best developments from the whole world. As modern medicine with its strong synthetic chemical drugs fails to combat nature, there is rapid and progressive acceptance of this system. Patients from all over the world are coming to India for Ayurveda treatment. With the popularity of the system the demand for Ayurvedic doctors are on the rise.

The Ayurvedic Colleges of India awards the Degree of "Ayurvedacharya" or B.A.M.S. (Bachelor of Ayurvedic Medicine & Surgery) at the bachelor level. Duration of B.A.M.S is 51/2 years/61/2 years including Internship.

Eligibility required to join B.A.M.S (Bachelor of Ayurvedic Medicine & Surgery) is Higher Secondary/P.U.C. preferably with Sanskrit or an examination equivalent there to, or Intermediate (Ayurvedic group- Physics, Chemistry, Biology and Sanskrit) of any recognised University/Board which confirms to the specifications approved by the Council. Minimum age of joining for BAMS course is 17 years.

Some institutions also offers certificate courses or pre Ayurvedic courses of 1 year to 2 years. Eligibility needed for such course is S.S.L.C./ Matriculation preferably with Sanskrit or an examination equivalent.

Main entrance exams for admission to a Bachelors degree in Ayurveda include, 'All India Pre-Medical/Pre-Dental Entrance Exam' conducted by Central Board of Secondary Examination (CBSE), Delhi on a national level to select the candidates at an all India level (except in the states of Jammu & Kashmir and Andhra Pradesh ) for admission to roughly 15% of the total seats in the colleges of each state, Pre-med entrance exam conducted by different states on their own for domiciled candidates. Some national level institutions where admission does not hinge on domicile status, give admission on the basis of merit in the 10+2 examination, or conducts their own entrance test for admission to BAMS courses.

Candidates who have passed MBBS course recognized by Medical Council of India and have completed one year internship training can also apply for Post Graduate course in Ayurveda.

To be a successful Ayurveda practitioner, one must have a strong power of concentration, self-confidence, responsibility, caring nature, good communication and counseling skills, and have the ability to make pivotal decisions after weighing up relevant factors.

An Ayurvedic practitioner can get employment as medical officer/doctor at government and private Ayurvedic hospitals. One can also start his/ her own practice or open ones own retail shop of Ayurveda medicines. They can also find employment as supervisors in 'Panch Karma' ( Ayurvedic massage) / health centres, as tutors in Ayurvedic colleges or do research, conduct workshops, seminars and retreats.

Nowadays Ayurvedic treatments are gaining much more importance. The number of Pharmaceutical companies manufacturing Ayurvedic medicines are increasing and the medicines are getting popular even in other countries. Patients from all over the world are coming to India for Ayurvedic treatment. More and more 'Pancha Karma Centres' are coming up for serving the tourists especially foreigners. With the popularity of the system the demand for Ayurvedic doctors are on the rise. In some of the states in India, it has been made mandatory to appoint at least one Ayurvedic Doctor in every civil hospital. So Ayurveda graduates have a bright scope in future.

In government Ayurveda hospitals the starting salary scale is Rs.8000-275-13500 for BAMS graduates. Tutors in Ayurveda colleges get more than Rs 8000/- per month. In private practice the remuneration depends totally on the effort you put in and your professional reputation. Dedicated and competent practitioners can earn more.