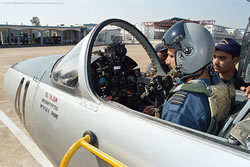 The Indian Air Force (IAF) the youngest of the three defence services, was commissioned on October 8, 1932, with four single-propeller engine Wapiti aircrafts, six pilot officers, two airmen and 19 Hawai Sepoys. The first Indian Chief of Air Staff, Air Marshal Subroto Mukherjee one of the founding members of the Air Force took over on 1st April 1954. Today, the IAF is the fourth largest Airforce in the world with its forty-five squadron strength and some of the most sophisticated fighter air crafts like Mirage 2000, MIG 29, MIG 27, Jaguar, MIG 25, MIG 23 and MIG 21. The transport wing has the huge IL 76 (Gajraj), AN 32 and other smaller aircrafts.

Armed Forces offer excellent career opportunities to the adventurous young candidates. Its a career that offers immense facilities, a privileged lifestyle and of course, honour in serving the country. The major activity of the air force is that of flying combat air crafts and helicopters. Other activities include technical work such as aeronautical engineering, electronics, and computer engineering, as well as administrative, financial and planning duties.

One can join the Air Force either as an Officer or Airman. The officer cadre provides opportunities for men having 10+2 (Intermediate), graduate, engineering and postgraduate degrees, in their three different branches. Women who are graduates, engineers and post graduates can join as an Officer in the Air force. The officers will be posted either as a Pilot, or a Navigator, or a Technical or a Ground Duty officer in any one of the Air Force bases. Women have opportunities only in the Officer cadre of the Air force.

In the Airmen cadre, there are opportunities even for class tenth pass (Matriculate) and below candidates, 10+2 (Intermediate), Diploma, graduates, postgraduates etc in their technical and non-technical trade fields.