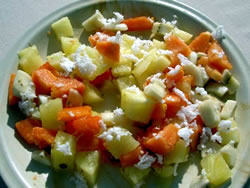 The state of Karnataka has a scrumptious cuisine. It has a lot to offer to a foodie of any type. Various regions of the the historically significant state specialise in different aspects of cooking. People in Mysore and its vicinity enjoy a typical pure vegetarian Karnataka meal while those living in the long coastal belt have devised delectable recipes with meat, fish and a huge number of other sea food.

Sesame and groundnut oil is used as the medium of cooking in the interiors of Karnataka whereas coconut oil is used by the people in the coastal region. Impact of cuisine of neighbouring state of Goa can be seen on the Mangalore coast where people use milk of coconut as the cooking medium.

Staple food for the people of Karnataka is rice, jowar (millets) and raggi. People in northern Karnataka use more of jowar while those in Mysore prefer raggi. Inhabitants of Coorg also have their distinct style of cooking. Influence of both Hindu and Muslim style of cooking can be seen here as the state had been under the control of rulers of both the communities from time to time.

Fresh coconut and chillies are important ingredients used in this cuisine. Rice is eaten in many forms like red grain rice, sannas (idli fluffed with toddy or yeast), pancakes, rice rottis, kori rotti (a dry, crisp, almost wafer-thin rice rotti which is served with chicken curry as a delicacy), and neer dosa.