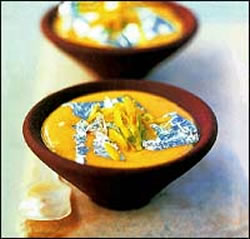 The state of Jammu and Kashmir is not just a paradise for the tourist but also for the lovers of good food. The state offers a variety of exotic recipes bearing a distinct seal of the state. Secret behind the mind-blowing cuisine of the state lies in the books of history which speaks of the invasion of Kashmir by Timur in the 15 th century AD. This resulted in the migration of hundreds of skilled cooks from Samarkand to cater to the royal tongue. The descendants of these cooks gifted the state the unsurpassable tradition of Wazwan, the delectable aromatic banquet of Kashmir. Wazwan consists of 36 course meal, essentially, meat based prepared by wazas (cooks) under the supervision of Vasta Waza, the master chef.

Kashmir excels in the preparation of non-vegetarian cuisine and more so in the meat based dishes with lamb being preferred over others. People of the state are liberal in the use of spices, condiments and curd. The medium of cooking is chiefly mustard oil. Another chararacteristic of Kashmir cuisine is the liberal dose of the expensive saffron or kesar, which is produced in the state. Rice forms the staple food of Kashmir.

Three different styles of cooking prevail in the state as Kashmiri Pandits, Muslims and Rajput follow their own traditions and proscriptions in cooking. Kashmiri Pandits refrain from the use of onions and garlic, while Muslims avoid the use of asafoetida (hing) and curds. Variations in recipes can also be observed in the different regions of the state. Cooking pattern as seen in Ladakh differs to that Hindu Dogras. This is also due to change in locally produced crops.