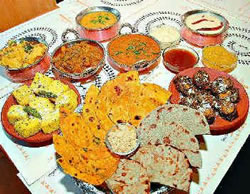 Gujarati cuisine is unlike any other Indian cuisine. A Gujarati House wife generally takes a great joy and pride in preparing the gujarati recipies. In Gujarat the recipe is also called Gujarati Rasoi. It has been found that the food prepared on routine basis even involve the neighborhood ladies and the final preparation is shared to the families of the invited ladies.

Gujarat is the only vegetarian state in India.  Majority of Gujaratis of are staunch vegetrians. Geographically Gujarat can be divided into four regions North Gujarat, Kathiawad, Kutch, and South Gujarat.  There are slight variations in eating habits and modes of preparation, because of  the climactic and cultural differences. Certain ingredients like yoghurt, buttermilk, cocnut, groundnut, sesame seeds, lime juice, sugar etc. are very common in Gujarati food.

It is traditionally served on silver platters to the accompaniment of rice and a variety of wheat breads.  There are few people who do not relish Gujarati savouries such as crisp spicy fried farshans, which can be bought in wayside stalls. The famous Gujarati thali served at weddings consists of farshans, sweetmeats and a variety of sweet and sour chutneys and pickles. This harmony derived from the mixing of the sweet with the salty is what makes the cooking of this state different from the rest of the Indian Continent.

Gujaratis are very fond of snacks known as Farshan. These are prepared in many different ways. Chivda is considered to the best of these Farshans and is popular in many other states."Gujarat is famous for Matthias and Namkeens. Everyone loves them.